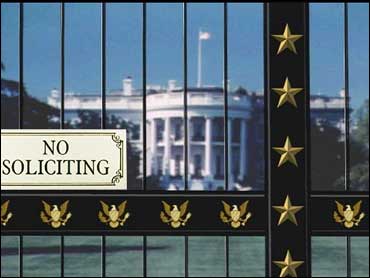 President Barack Obama says lobbyists pushing for projects in the stimulus package can't utter a word about them to administration officials. Lobbyists are hardly staying mum about this latest affront and are looking for ways to cope with the extraordinary speaking ban.

The restrictions, which began taking effect unevenly this week, have angered lobbyists already upset with Mr. Obama's repeated shots at them for wielding too much influence. Critics charge it may be unconstitutional to bar certain people - registered lobbyists - from speaking to government officials.

The rules bar lobbyists from conversations or meetings with federal officials about specific stimulus projects. They can talk generally about the measure's policies if projects are not discussed.

Lobbyists can submit written statements about stimulus projects that federal agencies must post on the Internet within three days.

"Basically they've said, 'Look, why don't you just put that in writing and we'll look at it,'" said Dave Wenhold, who heads the American League of Lobbyists, the profession's trade group. "That to me is clearly saying, 'Your input is not wanted here.'"

Wenhold has received hundreds of e-mails from irate lobbyists demanding action and is seeking a meeting with White House lawyers. One hurdle: The public's profoundly negative view of lobbyists gives them little clout in a showdown against a popular president.

"This is your profession, and it is being targeted solely for political gain. What are you going to do to protect it?" Wenhold e-mailed fellow lobbyists Wednesday.

Since the prohibition applies to registered lobbyists, some firms are thinking about having some of their lobbyists rescind their registrations, which could let them pitch stimulus projects to government officials. That, though, would severely limit the time they could spend lobbying each year while undermining disclosure laws requiring registered lobbyists to publicly report their activities.

Elizabeth Alexander, press secretary for Vice President Joe Biden, who is overseeing the stimulus package, called the rules "a historic breakthrough in ending closed-door lobbyist deal-making in favor of promoting the public interest through sunlight."

The Treasury Department has begun restricting contacts with lobbyists from companies seeking money from the $700 billion economic bailout package and will issue specific rules soon, said an agency official speaking anonymously because he was not authorized to talk publicly about the matter.

The $787 billion stimulus package, enacted earlier this year, is a pillar of President Obama's efforts to revive the stalled economy by creating what he claims will be 3.5 million jobs.

"It is not intended to fund projects for special interests," Mr. Obama wrote in a five-page memo March 20 describing how agencies should administer the stimulus package.

Craig Holman of the nonpartisan Public Citizen, a consumer advocacy group, called the rules "extreme" but justified to prevent interest groups from grabbing stimulus funds. Supporters say the limits do not curtail free speech since lobbyists can communicate in writing.

"It's very dubious that there's a First Amendment right to have your hired gun with you when you talk about those projects," said Luneburg, a University of Pittsburgh law professor.

Some lobbyists said they were already feeling the impact of the limitations, though inconsistently.

The American Council of Engineering Companies had to boot registered lobbyists from an online seminar the trade group arranged Thursday after Transportation Department officials who were giving briefings cited the new rules, according to documents obtained by The Associated Press.

The council said it would refund the $249 lobbyists paid to participate but give them a recording of the seminar and copies of any slides used.

Lobbyist Howard Marlowe said he discussed a stimulus project Monday with an administration official without any problems.

He also said the rules could discourage federal officials from meeting with lobbyists at all.

"Are people going to say, 'Oh, the more I talk to lobbyists and put it on the record, the more I'm going to be viewed by my superiors or folks over at the White House as being somehow bad'?", he said.

Others said the restrictions will encourage lobbyists to seek help from their connections on Capitol Hill. Many worry the stimulus restrictions could lead to further curbs.

"One of the big concerns is, is this a preface to similar activities as we go forward?", said H. Stewart Van Scoyoc, president of Van Scoyoc Associates.

Van Scoyoc and William Ferguson Jr., who heads The Ferguson Group, said they might increase the number of people at their firms who aren't registered lobbyists. The law requires people to register only if they spend more than 20 percent of their time lobbying officials.

That exception will give a big edge to many of Washington's law firms, which have some lobbyists but also plenty of non-lobbyist lawyers who could speak to government officials.
By Associated Press Writer Alan Fram; AP writer Julie Davis contributed to this report