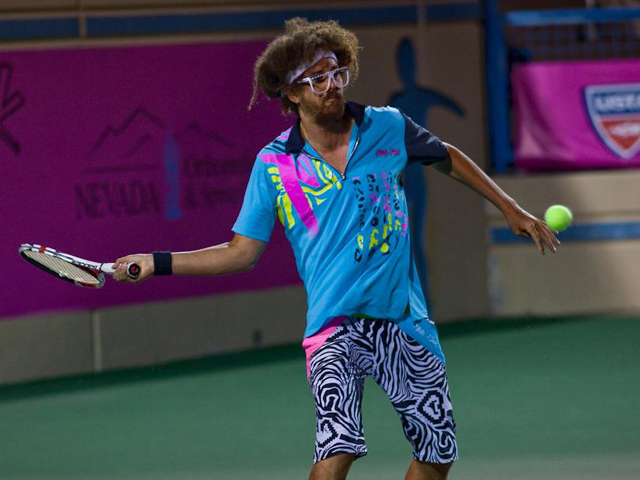 (CBS/AP) LMFAO's Redfoo is still party rocking, but these days, he's doing it without his partner-in-fun, Sky Blu.

Redfoo says he and Sky Blu - who is also his nephew - are taking a break as they focus on their own interests, personally and professionally.

And in the meantime, the wild-haired Redfoo, 37, is channeling his love for tennis. He's been spending time on the tennis courts in Las Vegas as a coach for a junior player and was recently spotted serving to children in a 10-and-under clinic during the Party Rock Open, a USTA Pro Circuit women's event in Las Vegas.

Earlier this month, he was in the stands at the U.S. Open rooting on new BFF Victoria Azarenka, who lost to Serena Williams for the women's championship. He's also been performing on some dates with the Fierce Five of women's gymnastics as the gold-winning Olympic team tours the nation.

"I kind of use the Phil Jackson approach which I teach her some vague things - I teach her how to think for herself on the court," he said. "She's really good at self-analyzing."

Tennis isn't his only love, though. He's performed on the USA Gymnastics tour, and he is also trying to make a tune for the New England Patriots.

"I'm actually working on a song for them, because they asked me to write a song for their season," he said of the Krafts, who own the team.

But it will likely be some time before he writes anything for LMFAO. Although he's been recording, he didn't know when he and Sky Blu might unite musically, adding that they are going in "different directions."

As for his solo material, Redfoo says he won't be straying far from hits like "Sexy and I Know It" and "Party Rock Anthem."

"All the music that I'm going to make is always going to be LMFAO-ish...I love all the topics that we talk about," he said. "I was really passionate about bringing party music to the world, so I will always be making some kind of party music."