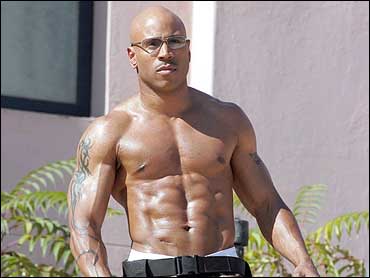 The handsome performer tells The Early Show co-anchor Harry Smith how his hard work is paying off.

Though acting is somewhat new for LL Cool J, he notes he has been seriously studying the craft for five years. Working with Samuel L. Jackson on this movie gave him the opportunity to see "a really great actor at work."

He says, "Sam is obviously an extremely talented actor. He embraced me. He doesn't always play the warm and fuzzy character, but behind the scenes, he's a really nice guy. We had a lot of long interesting conversations about acting, works in film, working in theater - different conversations about the craft of acting in general. He gave me a lot of good advice."

The film also offered him the opportunity to learn how real SWAT teams operate. He says, "We did everything from weapons training with all kind of kinds of different weapon, to watching actual video of SWAT teams in operation dealing with a crisis. We learned formation, how to enter rooms. We learned tactics and strategies for entering and exiting buildings that were occupied by dangerous suspects. We did so many different things that it was really, really just incredible."

But what female viewers may be enjoying the most is seeing the rapper flex his muscles. LL Cool J attributes his great shape to working consistently hard with his trainers. "Really staying focused. Hard work is paying off," he says.

"I have had a wonderful career in music thus far. Many people know me, but for lots of people, I'm just being introduced to them through film. I'm just thankful for the support. I hope more and more people get into what I'm doing and enjoy it," he says.

It has been a long way for him from where he grew up, he tells Smith. "As a black man growing up in Queens and growing up in a neighborhood -- I wasn't poor, but I wasn't the richest guy on the block either. Growing up basically in the 'hood, the ghetto, it's an amazing accomplishment for me to sit here with you and have these conversations. I respect it and appreciate it."