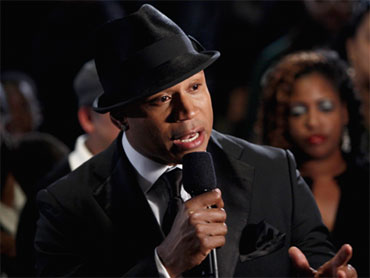 LL Cool J is paying tribute the best way he knows how.

The 41-year-old rapper-actor will kick off "The Grammy Nominations Concert Live! - Countdown to Music's Biggest Night" on Wednesday night by rapping to a medley of the past year's hits from artists like Lady Gaga and Kings of Leon. Sample lyric: "It's not Hugh Jackman - Yes, it's a black man."

"It was an interesting challenge," the "NCIS: Los Angeles" co-star and nominations show host said during a break from rehearsals late Tuesday at Club Nokia. "How can I pay homage to these artists but not ruin their songs and bring my own flavor to it and make it original?"

The 52nd annual Grammy Awards ceremony will be held Jan. 31 at the Staples Center.

Launched last year instead of a pre-dawn press conference, the nominations special, which will air on CBS, is the Recording Academy's prime-time opportunity to announce top nominees from over 100 categories.

Other performers on the show include Nick Jonas and The Administration, R&B crooner Maxwell, country duo Sugarland and the hip-hop foursome Black Eyed Peas. Presenters such as Katy Perry, T-Pain, George Lopez and Ringo Starr are scheduled to announce Grammy nominees in about a half-dozen categories.

The Black Eyed Peas will have a little digital help from their friends when they perform "I Gotta Feeling." At one point during their routine, a video of folks singing along - including celebs like Chris Daughtry and Seth Green - will blast on a flat-screen behind them.

For their performance, Sugarland will take it to the courtyard outside Club Nokia underneath a sparkly Christmas tree. Maxwell also plans to step outside the concert's intimate setting inside Club Nokia - complete with tables topped with chilled champagne and glitter.

Likely nominees include those name-dropped in LL Cool J's opening number. Among them: Taylor Swift, the country princess who recently swept the American Music Awards with five wins.