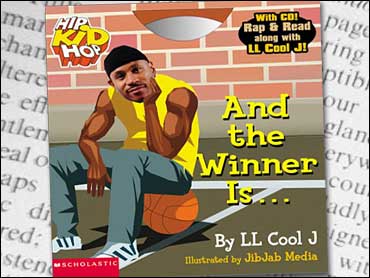 The three-time Grammy-award winner told The Saturday Early Show he wrote "And the Winner Is ..." - a "rap and read" book - to give children 4 to 10 years old some lessons about humility and sportsmanship.

The 32-page picture book by LL Cool J, whose real name is James Todd Smith, is packaged with an original two-track CD that includes a song version of the story performed by the rapper himself. The book also has a music-only track so that the children can read and rap along on their own.

The rapper/actor said he was looking for a way to influence kids in a positive way: "I just think there's room for something that's positive in hip hop and someone had to have the courage and say, 'I care about the kids.'"

He said he slowed down his music and made his rhymes grammatically correct to appeal to children. "Writing the book was fun. Recording the song was a lot of fun," he added.

The artist was first approached about the project by the music supervisor for Hip Kid Hop, Karyn Rachtman. "She just talked to me about the series … and I suggested to her, maybe we could do a CD for the children's book. So it was all a collaborative effort," said LL Cool J.

He said he hopes the book will teach the young how to be graceful and humble but strong. The rapper, who is also a father, said, "I hope it teaches them to be confident but not arrogant and at the same time when they lose, not be down on themselves either."

And what's next for LL Cool J? He says he stars opposite Gabrielle Union in a film due out in February called "Deliver Us From Eva." He will also star with Val Kilmer and Christian Slater in a movie directed by Renny Harlin called "Mindhunters." LL Cool J will also release a new record called "Ten" and tour to promote the album.

The artist says he's not sure if he'll do more books. "I have to see what I'm inspired to do creatively," he said.

Spanish-Style Tapas On A Shoestring