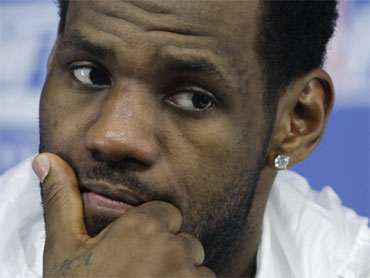 It is the summer of 2035 and a 50 year old LeBron James is testifying before the House Committee on Commercial Sports. They want details about his hyperbolic "decision" to leave the Cleveland Cavaliers and join the Miami Heat back in the Old NBA when it was played by human athletes. The HCCS, formed in 2030 with the expressed motive of finding a way to replace the avatars in commercial sports with a return of human athletes, is grilling James on the events of July 8, 2010.

"It was a tipping point in the death of human-played pro sports" suggests one committee member. "Nothing seemed real in professional sports after that."

A cyborg for the Avatar Player's Union could not be reached for comment.

The funny thing about surrealism is that, fictionalized as it seems, it is often based on real events, empirical science, and cultural trends. Pro athletes replaced by computer-generated images? Not in our lifetime, we scream. But with the trending in pro sports away from athletic performance and towards spectacularized drama, it is not inconceivable for our children to witness a world where fantasy sports are more real than real sports and even the pro athlete-as-entertainer, who died under the weight of their own import, were replaced by shiny cartoon figures that once modeled them.

Much could and has been said about LeBron James' one hour TV show. And those of us who continue to speak and write about it are complicit in sustaining the effects. But we might ponder issues beyond the obvious, beginning with asking the basics: How did we allow ourselves to come to this point where we planned our entire week around one man telling us where he is going to work next year?

If we are ever to witness, if not accept the final demise of the athlete-hero and his or her replacement with the athlete-entertainer, the LeBron-athon may in fact be that moment of difference. Sport pundits everywhere are stating clearly now what has been the case for many years--professional athletes in the power and performance sports are entertainers. Sometimes more, sometimes less, but at their root they are compensated for, and expected to thrill us with their physical skill and create the tension and release of any engaging narrative; in short, to perform for our pleasure.

We create them. We pay their salary. And under this mode I would suggest that as any good employer, we, the fans, are both subject to and responsible for their actions. But since not everyone agrees on that relational model, like a child loving but refusing to kiss his grandpa, it's consequentially confusing.

And if iconic athletes like James don't quite blur the lines between athletic and celebrity performance so much as they erase it, how can we as fans simultaneously tune in and be turned off by their show? A better reply might be in dropping out, maybe go outside and shoot a few hoops of our own. But that means ignoring the tension so that one is not captive to its release. It means admitting that the business of sport is the business of business.

This kind of a misunderstood relationship reeks of paternalism and smells poorly to the fans. We might think that we understand the athlete-as-entertainer concept and that we understand the player's intersections with media, corporate partners, league structures, and team owners. But until James' royal decree catalyzed our feelings about the true role of the pro athlete, we held out hope that commercial sports was still much more than Reality TV, more than voting for our idols with jersey sales and having our case heard in the court of public opinion. At its root, we want to believe that pro sport is more than a high stakes game and closer to elemental play, albeit with lots of zeros.

Then how would we explain that more people will have watched ESPN's The Decision than will likely watch any deciding playoff game the Heat may find itself engaged with?

We should thank LeBron. When he told ESPN's Michael Wilbon "this is a business," he reminded us that he is both a product and a producer, something to be bought but also who has much also to sell. Above all, LeBron reminds us that when the athletes negotiated for more control and free agency, they knew exactly where it would take them.

The good news is that sport, even in its commercial dress, is still a social construct, a collective of people gathered to play or witness an event of their own choosing. No one has a gun to our heads and our tastes in sport can and will change over time. If spectators want to see pro sport return to a focus on the playing and less on the player, they will have to influence the product by embracing the capitalist model. They will have to vote with their attendance and their habits of consumption. Imagine how different this would've all played out if the nearly 10 million viewers decided against The Decision?

Most corporations know and react to the shifting demands of their consumers. They don't always get it right or tell the whole truth but they can sure try to woo us when they need us. Case in point, Cavalier majority owner, Dan Gilbert's "personal guarantee" of a championship before telling Cleveland fans to "sleep well." Between he and James though, we might side with Gilbert because America still loves the underdog and hell hath no furry like a wealthy former sub-prime mortgage financier scorned.

Gilbert and LeBron are saying the same thing--their business in sport comes first. But where one can be faulted for the medium, the other boggled the message. And in their contrasting fan grabs, many of us just wanted to go take a shower, sickened by the deceptions, much of it of our own making.

In the aftermath the fan proletariat remains, bloodied but unbowed, the Everyman with a ticket stub and a sinking feeling about the state of modern commercial sport.

It makes the sports fan long for the simple confusion of boxing.

NFL to kick off second round of playoffs