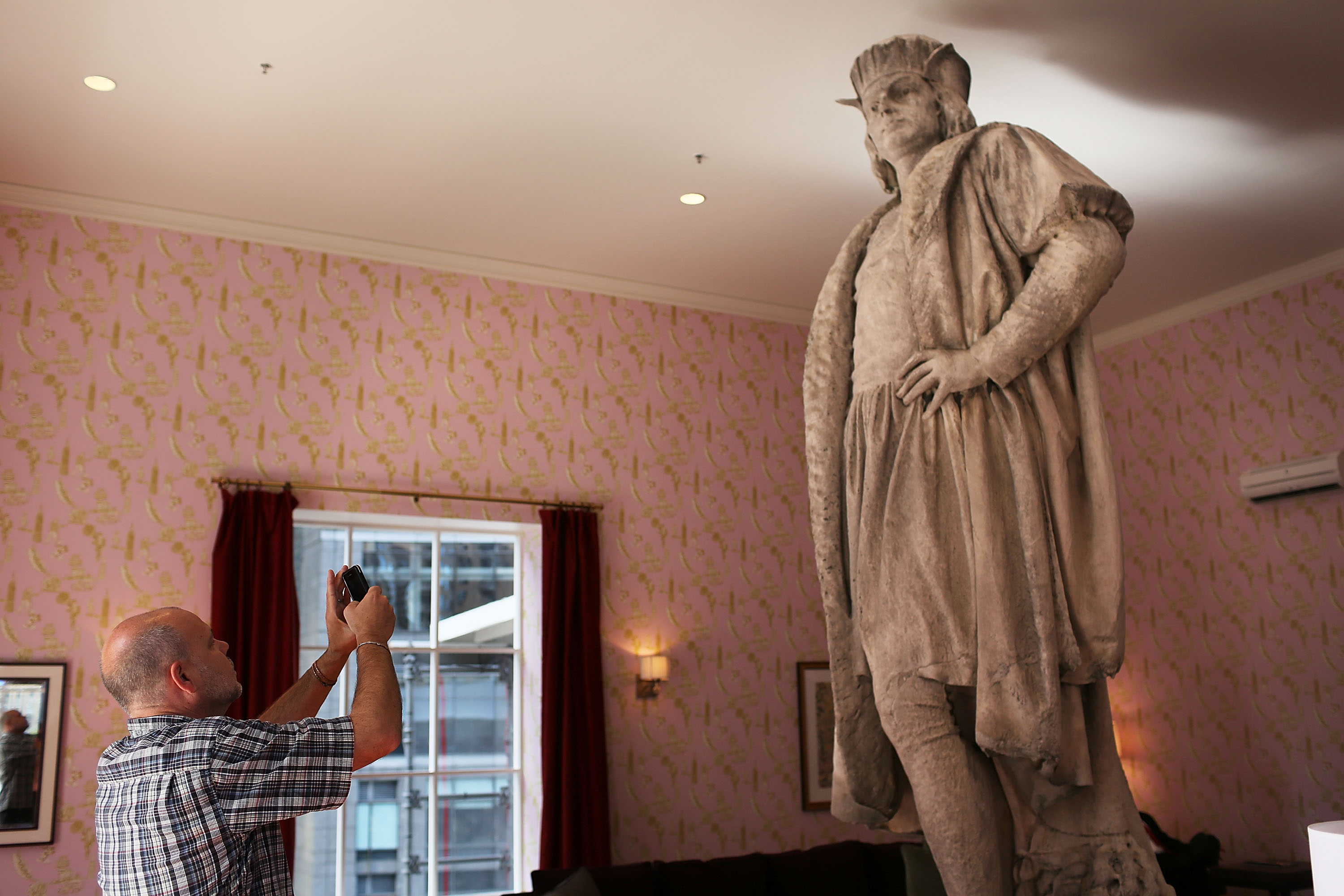 (CBS/AP) NEW YORK - A new exhibit is allowing people in New York to view a statue of Christopher Columbus as if it were right inside their living room.

Most New Yorkers can only dream of an apartment like this - spectacular views of midtown Manhattan, an iconic work of art in the living room and prime Columbus Circle location.

That 70-foot climb from the ground floor could be a problem, though. And it couldn't be a long-term lease, or any lease actually, because it's not even a real residence. It's the latest creation by Japanese artist Tatzu Nishi, turning the Columbus Monument into a piece of conceptual art.

"Discovering Columbus" is a 27-foot by 30-foot living room - complete with couch, lamps, television and coffee table - wrapping around the statue, situated atop a six-story column at one of Manhattan's busiest intersections near Central Park.

Starting Thursday, up to 25 people at a time can enter the living room by using the stairs inside the scaffolding and enjoy a rare opportunity to see the 1892 marble figure of the great Italian explorer up close. An elevator is available for those who can't climb the stairs.

The spacious room with contemporary furnishings is so authentic looking it is easy to forget you're standing on top of a huge monument in Manhattan. Its pink wallpaper, designed by Nishi, features small illustrations of Elvis, Marilyn Monroe, Mickey Mouse, cowboys and other pop culture images.

Burgundy drapes hang on large picture windows. Visitors can sit on the purple couch, at the foot of Columbus, and watch a flat-screen TV tuned in to CNN.

But not everyone is enthused about the artwork.

"It looks like a trailer park. The only thing missing are the pink flamingos," said John Mancini, executive director of the Italic Institute of America, which represents about 1,000 Italians nationwide. "It's an atrocious piece of art from the outside." He said he also has safety concerns with the installation.

The column was created by Italian sculptor Gaetano Russo to commemorate the 400th anniversary of Columbus' first voyage to the Americas.

"How can another artist come and reinterpret the original artist's work?" asked Mancini, noting that the statue won't be visible from the street as it normally would during the annual Oct. 8 Columbus Day Parade.

Other members of the Italian-American community have spoken up as well.

"This is sort of the beating heart of New York City, both for Italians and for all immigrants who came to this country," Frank Vernuccio told CBS station WCBS-TV in New York. "I feel it is very much a desecration."

One Voice Coalition's Andre Dimino told WCBS-TV that he is disappointed that the statue won't be visible during the annual Columbus Day Parade in October, calling the exhibit a "disgrace."

"He's been sitting up there for 120 years with nobody bothering him, enjoying the view. And now this has to be done? I think this is just another swipe at the Italian-American community," Dimino said.

Mayor Michael Bloomberg says the piece gives New Yorkers and tourists "a chance to do a little exploring" and take a look at the statue up close.

"The sculpture was made to be viewed," he said.

Nishi, who is internationally known for transforming historical monuments by surrounding them with domestic spaces, said the aim of his piece is to put the viewer at eye level with the statue. "Discovering Columbus" is his first public art project in the United States.

His other works include "Villa Victoria," a temporary functioning hotel around a statue of Queen Victoria for the 2002 Liverpool Biennial.

The Columbus Citizens Foundation, a 600-member organization that sponsors the annual Columbus Day Parade, has said the artwork will mark the only time people will be able come right up to the majestic statue. The 50,000-member National Italian American Foundation in Washington, D.C., said the installation also will provoke discussion about Christopher Columbus' role in history.

The city provided $1 million for the conservation of the monument — a restoration project that will make use of the scaffolding around the privately-funded installation. The free installation runs through Nov. 18.

Visitors can reserve advance passes to "Discovering Columbus" through the Public Art Fund's website at www.publicartfund.org .