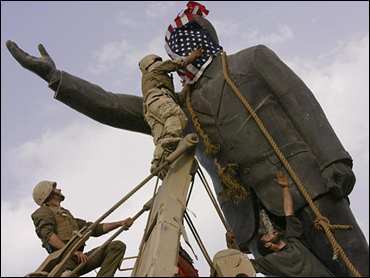 It may nto be the official end of the war, but the fall of the Saddam statue will be its symbol. In his latest Against the Grain commentary, CBSNews.com's Dick Meyer reflects on watching history, live on TV (or on a Webcast!).

History, I learned today, is a lot like pornography – you know it when you see it.

Even if you just see it on TV.

The whole world watched today as Iraqis and American Marines lynched and toppled the most prominent of Baghdad's many giant Saddam Hussein statues.

It symbolized so much. The Iraqis couldn't do it by themselves; they needed help from foreign troops and their machines. The Giant Saddam didn't fall down all at once. And there was fighting just a few miles away.

But the live televised fall of that massive statue will be The Image.

It may not yet be entirely clear whether The Image marked the fall of Baghdad, the vanquishing of Saddam or something far more complicated.

It doesn't much matter. It is indelible.

There may be much more fighting ahead. Saddam may join the ranks of Osama bin Laden and Eric Rudolph as an uncatchable villain. Or it could all be over by the weekend.

The next phase of Iraqi history may be a prolonged foreign occupation marked by terrorism and violence. Or it may be the beginning of Iraq's transition into being an open society, an inspiration to other Arab countries.

Whatever the eventual outcome, today's image is indelible.

Already The Image means different things to different people. Of course it does. Every viewer, from every place, has a unique perspective. And the thing about most people's perspectives on the news and history is that they think they are objective. None are.

On the conservative weeklystandard.com, David Brooks wrote, "However things shake out over the next months and years, this is the sort of day that represents what the United States is on earth to achieve. Thank God we have the political leaders and the military capabilities to realize the ideals that have always been embodied in our founding documents."

Tewfic Mishlawi, editor of the English language Middle East Reporter, told UPI, "Despite that Iraqis want to see Saddam removed from power and have suffered from his brutal regime, they will resent a foreign power," he said.

But he added, "The purpose is to establish Israel as a dominating power in the region on behalf of the U.S."

Bit of a different take on things than we Americans are used to hearing.

On Al Jazeera's English Web site, the lead story was a very straight forward account of the day's news: "'No more Saddam Hussein,' chanted one group, waving to troops as they passed. 'We love you, we love you.' One young man ran alongside a Marine armored personnel carrier trying to hand over a heavy belt of ammunition. An older man made a wild kicking gesture with his foot, saying 'Goodbye Saddam.'"

An editorial on Arabnews.com bitterly said:

"Everyone has betrayed everyone. America led the way, abandoning its Jeffersonian democratic foundations in favor of crude economic exploitation and colonial expansion. The Arabs quickly followed suit, abandoning their brothers. Britain turned its back on Europe, while Europe chose lip service over action when push came to shove. Saddam long ago betrayed his people and so the Iraqi people, in turn, predictably betrayed him. Less predictable, but equally devastating, was the passive betrayal of the Republican Guard. They betrayed their honor and dignity, which we are supposed to believe are the most important things to any Arab man, let alone an Arab fighter."

The Iraqi people, over a long period of time I suspect, will determine the answers.

The meaning of The Image of the fall of Saddam today is in the eye of the beholder, as they say. It is, of course, more likely to reflect back what the beholder already thinks than it is to shed light on something new.

But we saw history on the television today. On that everyone agrees.