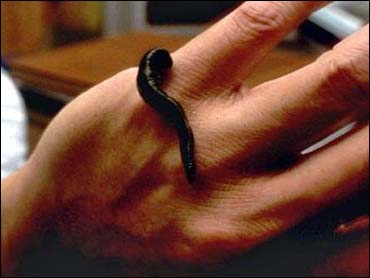 Doctors have removed a leech from the nose of a 55-year-old Hong Kong woman after she swam and washed her face in a stream, a medical journal reported.

The woman went to her doctor complaining of nose bleeds and an occasional sensation that something was blocking her left nostril, the Hong Kong Medical Journal said in its April issue. Her family doctor noticed a "brownish mass" in her nostril but couldn't remove it because of heavy bleeding, the journal said.

The patient was taken to the emergency room, where doctors identified the problem as a bloodsucking leech. They had trouble pulling it out because the 2-inch-long invertebrate retracted into the nostril and disappeared, the journal said.

Part of the slimy leech was in a passage of her nasal cavity and a larger segment was in her sinus cavity, the article said.

Doctors used a nasal spray to anesthetize the dark brown leech that had a sucker on the front part of its body. "After two minutes, the leech moved slowly out of the antrum (sinus) and was retrieved with forceps," the journal said.

The woman said that one month before her symptoms developed, she swam and washed her face in a stream while hiking. Doctors checked other members of her hiking group and found another leech in the nose of a man who washed his face in the stream, the journal said.

The article said the leech could have caused suffocation if it moved into the patients' larynx, or voice box.