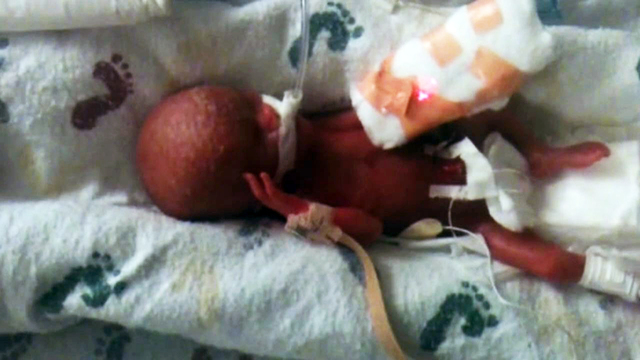 When Jennifer and Gannon Kupko of York Haven, Pa., won their battle to become parents with the help of in vitro fertilization, they didn't expect that their baby would have to struggle just to stay alive.

Their son, Gannon, was born 12 weeks prematurely last December. He weighed only 13 ounces and measured 10 inches long. He was so small that his dad's wedding ring could slide right up his arm, CBS 21 Harrisburg reports.

Since then, the boy's resilience has earned him the nickname "Warrior" Gannon.

His mom Jennifer says she was scared when she found out that her baby would be delivered 12 weeks early. Doctors at York Hospital were unable to reassure her that he would survive.

"They still won't give us odds to this day," she said.

"We've been fighting odds since he started falling behind," Gannon Sr. added.

But from the moment he was born, little Gannon showed fighting spirit. "When he came out he was throwing his arm, legs," which is a good trait in premature babies, his mom said the hospital staff told her.

The doctors were surprised when Gannon Jr. made it to Christmas. His mom was able to give him his first hug at day 38, which was a very special day for her, she said. "You wanted to cry but can't show stress because he will feel it," she said.

By St. Patrick's Day the boy weighed nearly 6 pounds, and by Easter he reached 7 pounds.

Little Gannon was moved to specialized care in April. Jennifer quit her job to care for him, and is now learning to clean and care for the boy's trach - the tube through which he gets oxygen. Once she completes the training, the Kupkos look forward to finally taking their son home.