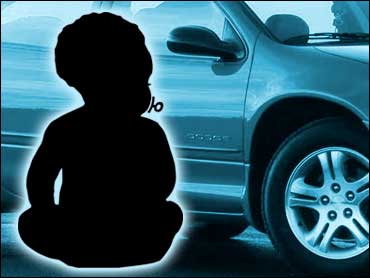 It's estimated that dozens of children are backed over by vehciles every week in parking lots and driveways.

Just this Easter Sunday in Texas, a 1-year-old boy was killed when he was backed over in the family driveway.

Experts want parents to be on alert.

"Early Show" Consumer Correspondent Susan Koeppen points out that, so far this year, at least 17 children have died after being backed over.

April, she notes, is typically the peak month for these accidents, because the weather is turning nice and more kids are outside playing.

Koeppen shared the story of 16-month-old Alec Nelson, who lost his life in his family's driveway.

His mother, Adriann Raschdorf-Nelson, told Koeppen, "He was endlessly happy. He always had a smile on his face."

Bill Nelson, the boy's father, said, "There are a lot of great memories of him. We think about what he would be doing today."

Raschdorf-Nelson found her son. He'd been backed over by an SUV. His grandfather was behind the wheel.

Adriann Raschdorf-Nelson said, "By the time I got to Alec, I already knew he was gone."

Rashdorf-Nelson explained, "There was a little dip in the driveway where there was a hill, and that's what he thought he had hit when he felt a bump. It's been very, very tough for him."

In 70 percent of back-over accidents, it's a family member who's driving. In Alec's case, his grandfather had no idea the little boy was behind the car -- even after he had checked his mirrors.

Rashdorf-Nelson said, "My father wakes up every morning thinking about what happened."

Bill said, "We live in a dead-end street purposely. We thought it was a very safe place for our kids to raise them, and never in my wildest nightmares would I think that we would lose a child on our property."

According to Kids and Cars, a non-profit safety organization which tracks back over accidents, 50 children a week are backed over by cars -- among that number two children die. Most victims are between 12 and 23 months old.

Koeppen demonstrated how difficult it is to see behind an SUV. She showed the mirrors on the vehicle -- nothing seemed to be behind the car. However, if you actually looked behind the car, she showed how 60 kids could sit behind it without being seen.

Susan Auriemma, vice president of Kids and Cars, told Koeppen, "This blows my mind. And I've seen this before, I've seen it over and over again, and I still am a little bit in awe of the fact that the blind zone is so large."

According to Kids and Cars, 60 percent of cases involve a larger vehicle like a van, SUV or truck. Minivans, Kids and Cars reports, have an average blind zone of up to 28 feet. SUVs have 39-foot blind zone. For some trucks, the blind zone can be as much as 50 feet.

Auriemma says, "Parents need to be aware of certain things. They need to teach children that a parked car can become a reversing car in a minute."

Auriemma says back up cameras can help spot children or toys in a driveway, but parents should always take extra steps when backing up.

She said, "Before they get into their vehicle, they always want to walk around the car, make sure it's free and clear, and always continue to use your mirrors as you're backing upm and scan the area as you're backing to make sure no child enters that blind zone."

Alec's death has changed the way the Nelson family drives. Both of their cars now have back up cameras, and the family helped pass Alec's Law, which requires car dealers in their county to pass out safety information to buyers.

Koeppen added on "The Early Show" that safety experts say it's important for parents to teach their kids that a driveway is a place for cars, not for kids.

Another danger she mentioned are blind zones in front of cars. Koeppen said most vehicles have a blind zone of six to eight feet in the front. She urged people to walk all the way around the vehicle to make sure everything is clear before driving.