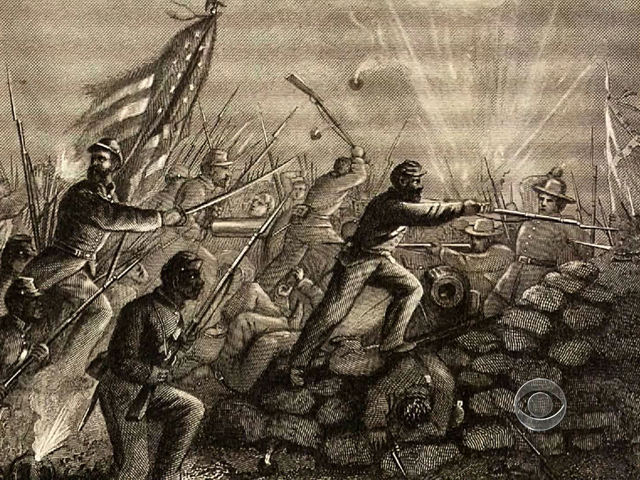 (CBS News) NEW BEDFORD, Mass. -- Earlier this month, America marked the 150th anniversary of the battle of Gettysburg. This week, there are commemorations for a lesser-known Civil War battle, which began 150 years ago Thursday. It did not have the strategic importance of Gettysburg, but it was a turning point in American history.

The battle of Fort Wagner, South Carolina, was a defeat for the Union Army but a galvanizing victory for freedom.

The flag bearer for the 54th Massachusetts regiment was an escaped slave named William Carney.

Carl Cruz is his great, great, grand-nephew: "When I think of what Sgt. Carney did and the fact that duty was so important even at a time when the country did not feel that he was a man -- that was really pretty powerful."

Carney and hundreds of other African Americans enlisted in the 54th after President Lincoln signed the Emancipation Proclamation. The men of the Union's first black regiment went south to fight, knowing that if they were captured they could be sold back into slavery.

"They saw it as an opportunity," said Cruz, "to show that they were the same kind of patriot as everyone else that was fighting for their country."

"Even though they lost the battle," said Sarah Greenough, curator at the National Gallery of Art, "the 54th won everyone's respect because they proved that African Americans could be exemplary soldiers."

The museum is preparing an exhibition about the regiment, including the first Medal of Honor ever awarded to an African American.

"And then here's Carney with his Medal of Honor," said Greenough, showing a black-and-white image of the soldier.

Like everything else in the march toward equality, the medal was a long time coming.

"Carney did not receive his medal until 1900," said Greenough.

One-hundred fifty years later, you can see the 54th's place in the long arc toward justice.

As for where he would put the 54th regiment in the history of the civil rights movement, Cruz said: "I'd put it right up front, like the March on Washington."

Sgt. William Carney lies buried in his family plot in New Bedford, Mass. His tombstone has been chipped away by souvenir hunters, but he is still right up front.