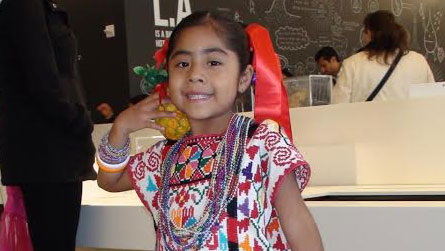 WASHINGTON D.C. -- When Pope Francis speaks of being an immigrant, he's referring to his birth in Argentina, to Italian parents. He is the first pope in 1,000 years not born in Europe.

Maybe, that's what was behind one of the most remarkable moments of his visit so far -- when a 5-year-old girl immigrated beyond the security line.

Sophie Cruz squeezed through security barriers, to deliver a message to the pope.

A child of undocumented immigrants, she has put a young face on the debate over immigration reform.

Sophie traveled to Washington D.C. from Los Angeles, with her father. In her letter, she asks Francis to help all immigrant children.

The Secret Service held Sophie back, but when the pope saw her, he waved her over and blessed her.

It was reminiscent of a moment last year, when another girl from Los Angeles greeted the pope in St. Peter's Square.

11-year-old Jersey Vargas traveled there to help her father, Mario, who was in the custody of U.S. immigration.

She called it her miracle moment.

"I told him please help my dad because he is gonna be deported and it's unfair that millions of children are also suffering in my same situation," she recalled. "He kissed me on my forehead and he told me he was gonna talk with the president."

Not long after, her father was released. His case is now under review.

Vargas was also in Washington on Wednesday, hoping for another meeting with the pope.

"I am very passionate because about what happened to my dad," she said.

Two young children calling the attention of the world to a grownup problem.