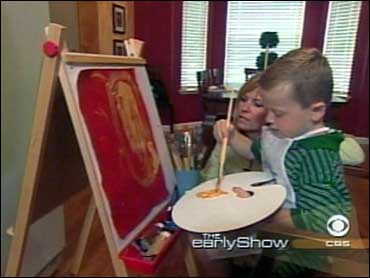 A 4-year-old California boy has an amazing talent for art. His paintings have sold for thousands of dollars, but while he dazzles with his brushstrokes, he's also battling a serious illness.

CBS News Correspondent Sandra Hughes reports like many artists, Parker Fritsch can be a little temperamental when he's creating.

Once his shyness wears off, he commands center stage, using bold strokes and colors that transcend his age. But ask him a question, and it's a 4 year old who answers.

What's your his thing about painting?

"Circling," he says, adding that he was only a year old when he found out he was good at painting.

Actually his mother, an art teacher, discovered his rare talent, just before doctors discovered something else: a rare form of leukemia had invaded Parker's body. He was just 2 years old.

"It was a nightmare," Parker's mom, Melissa, says. "We had a brand new baby, and it was our darkest day."

Parker spent much of the next year in and out of treatment at Fresno Children's Hospital, where the doctors and nurses were awed by his strength and talent.

Parker's nurse, Kimberly Link, says, "He brought in a painting for a doctor that we had here. And it was framed and matted and it was gorgeous. It's something you would see hanging in a museum. It was just phenomenal."

In fact, Parker's paintings did end up hanging in a museum, the Fresno Museum of Art, where "Strange Man One And Two" hang side by side with "T-Rex Waiting For Her Babies To Hatch," all named by Parker. And it was at the museum that an auction of his works brought thousands of dollars, including a painting he titled, "Octopus."

Marilyn Kelarjian, who organized the museum exhibit, says, pointing at a painting, "This one went for $1,400."

Kelarjian, who is also a family friend, notes, "Every penny is going to a leukemia fund. It's the Parker Fritsch Leukemia Fund. And the money's there if and when Parker needs a bone marrow transplant."

If Parker's disease stays in remission and he doesn't need a transplant, Kelarjian says, "All of it's going to the Leukemia/Lymphoma Society and to Children's Hospital."

Where little Parker Fritsch continues to inspire, nurse Link says, "He's going through something so awful and yet, he still stays so happy and so playful, and still just trucking through. That's very inspirational to anybody's life."

But his story and his artwork speak to strangers, too.

About the paintings, museum visitor, Debbie Beshears says, "They're a little bit unusual, but coming from a little kid, they're awesome. He's a little guy, and it's just amazing that he did this."

Back at home, Parker's just as likely to be found playing games with his family. His mom says he only paints a couple of times a month, but when he does, anything or anyone can be his muse: Like mom and dad on tax day.

Melissa Fritsch says, "I asked him, 'What is this Parker?' 'Well, do you remember that day when you and dad were trying to find all those receipts and duh, duh, duh?' And I'm like, 'Oh, you mean tax day.' 'Yeah, mom, that's what this is.'"

By the end of CBS visit, Parker created a very, very abstract fire-breathing dragon. And he tells Hughes he is going to hang it up in his room.

"I didn't get any in my room yet," he says. The ones in the museum were meant for his room, and people ended up buying them. Why? "'Cause they like them," he says.