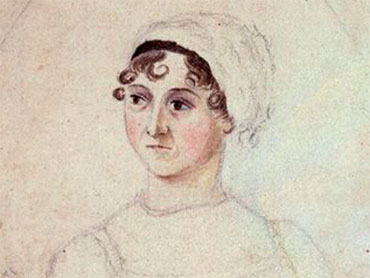 She's renowned for her precise, exquisite prose, but new research shows Jane Austen was a poor speller and erratic grammarian who got a big helping hand from her editor.

She said Saturday that they contradicted the claim by Austen's brother Henry that "everything came finished from her pen."

"In reading the manuscripts, it quickly becomes clear that this delicate precision is missing," Sutherland said.

She said the papers show "blots, crossings out, messiness," and a writer who "broke most of the rules for writing good English."

"In particular, the high degree of polished punctuation and epigrammatic style we see in 'Emma' and 'Persuasion' is simply not there," Sutherland said.

Sutherland said letters from Austen's publisher reveal that editor William Gifford was heavily involved in making sense of Austen's sensibility, honing the style of her late novels "Emma" and "Persuasion."

Gifford did not edit earlier books such as "Sense and Sensibility" and "Pride and Prejudice," whose inconsistencies have sometimes been blamed on bad printing.

"In fact, the style in these novels is much closer to Austen's manuscript hand," Sutherland said.

Sutherland said the revelations shouldn't damage the reputation of Austen, who was little known when she died in 1817 at the age of 41 but has since become one of Britain's most beloved authors.

Sutherland said the documents reveal an experimental writer who was "even better at writing dialogue and conversation than the edited style of her published novels suggest."

"The manuscript evidence offers a different face for Jane Austen, one smoothed out in the famous printed novels," she said.

Austen's handwritten manuscripts will go online Monday at www.janeausten.ac.uk, the result of a three-year project to digitize the author's unpublished work.