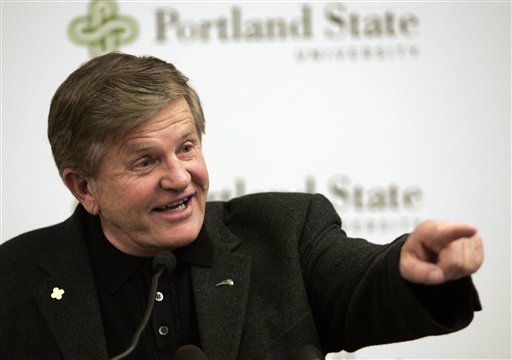 Jerry Glanville is ready to run another football team. This time, the former NFL coach is taking over at Portland State _ vowing to turn the Vikings into the "hardest hitting football team on the West Coast."

Glanville, former coach of the NFL's Houston Oilers and Atlanta Falcons, has been defensive coordinator at Hawaii for the past two seasons under June Jones.

He replaces Tim Walsh, who resigned Feb. 16 after 14 years with the Division I-AA Vikings to take over as offensive coordinator for Army.

"I hope our football team does not just represent the university. I want this to be the city's football team," Glanville said.

The terms of Glanville's contract _ including its length _ have not yet been determined. Glanville interviewed over a whirlwind visit Monday and Tuesday.

"We had to convince him that the athletic department, the university and the city, that we are committed to this football team," interim athletic director Teri Mariani said.

Glanville, 65, developed the so-called "Gritz Blitz" defense and was head coach of the Houston Oilers from 1986-89 and the Atlanta Falcons from 1990-93. He was known as much for his personality as his coaching.

Outspoken and often dressed in black, he playfully left game tickets for Elvis Presley to pay homage to the late singer.

After head coaching stints at Georgia Tech and Western Kentucky, Glanville embarked on a pro career as a special teams coach and defensive assistant with the Detroit Lions.

He put his caching career aside for the next 11 years and worked in television, with such shows as "NFL Today" and a five-year run on Fox.

Glanville joined Jones' staff at Hawaii in 2005. Glanville said Jones, who starred at quarterback for Portland State in the mid-1970s, was the one who persuaded him to take the job.

"He said, `You and that school would be tremendous,'" Glanville said.

In a packed conference room at Portland State's student union, Glanville was applauded by boosters. His wife Brenda was bestowed with flowers from President Daniel Bernstine.

"I think we're on our way to have a lot of fun," Glanville said. "One thing about the Glanvilles is that we have fun."

Walsh went 90-68 at Portland State, including 7-4 last season. He led the Vikings to three straight playoff appearances at the Division II level before they moved up to Division I-AA and the Big Sky Conference in 1996.

"I think we're already a good football team," Glanville said. "We're going to go to work and we're going to build on all the good things the previous coaching staff was able to do"