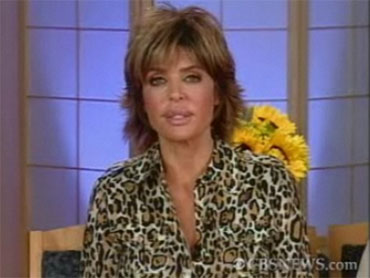 Soap-turned-reality-TV star Lisa Rinna exudes sexuality - whether it's through her impressive post-pregnancy body, her marriage to actor Harry Hamlin or her sultry moves on one of TV's most popular shows, "Dancing with the Stars."

With all of these things going for her, it's hard to imagine that she would have problems in the bedroom.

But the candid actress says she suffered from sexual dysfunction and wants to help other women with the condition, which is widely accepted for men, but not for women.

Photos: "Dancing with the Stars" Season 10
Highlights of Past "Dancing" Seasons

Rinna, who was able to get her sex drive back, is spearheading the campaign, "Sex, Brain, Body: Make the Connection" along with sexual health expert Dr. Susan Kellogg-Spadt, co-founder of The Pelvic and Sexual Health Institute of Philadelphia, and the Society for Women's Health Research. The new educational campaign will focus on female sexual health and highlight the role the brain is thought to play in desire.

"I have always been very open and honest about my sexuality. And at a time, I lost my sex drive, basically," Rinna told CBSNews.com.

Rinna, who suffered from post-partum depression, one of the conditions that can leaad to a loss of desire, hopes the campaign will create a dialogue among women.

"As women, I think we're not comfortable talking about sex. We're not even supposed to have it in our society, or want to have it; if you do, you're a bad girl..." she said. "What I am learning is that the brain is the biggest sexual organ and that is the connection. I think that it's important for every woman to feel entitled to have a healthly sex life."

According to Kellogg-Spadt, many women suffer from a condition known as Hypoactive Sexual Desire Disorder (HSDD). She points out that the medical field is at an "exciting place" because HSDD is now on medical researchers' radar.

HSDD affects up to 30 percent of women, according to CBS News Medical Correspondent Dr. Jennifer Ashton.

According to Ashton, low sex drive among women is caused by numerous, often complex factors, which include:

• Hormonal changes, notably menopause or pregnancy or breast-feeding.
• Depression
• Stress/anxiety, which could be based on relationship problems
• Medications like antidepressants or blood pressure medicines.

While there is no FDA approved drug for HSDD, there may be a new "female Viagra" in the works called Flibanserin, that was originally developed as an antidepressant.

Ashton said a new paper from the American College of Obstetricians and Gynecologists reports that a 24-week treatment of the pill Flibanserin resulted in improved sexual desire among many women.

With her Hollywood glamour and connections, Rinna is helping to spearhead a movement that will hopefully shift the mindset about female sexual health.

Rinna starred on "Days of our Lives," "Melrose Place." Now, she has a new TV series debuting this fall on TVland called "Harry Loves Lisa." Her book, 'Rinnavation: Getting Your Best Life,' has been released in paperback.