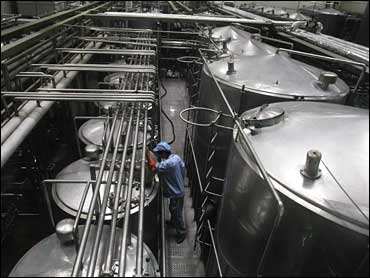 Anglo-Dutch food giant Unilever is recalling its Lipton-brand milk tea powder in Hong Kong and Macau after they were found to contain traces of a banned industrial chemical, the company said Tuesday.

The recall of four batches of Lipton's 3-in-1 milk tea powder came after the company's internal quality check found melamine, used to make plastics and fertilizers, in the products, Unilever Hong Kong Ltd. said in a statement.

Dozens of Chinese-made food products have been found to contain melamine, killing four babies and sickening more than 50,000 in mainland China. According to the state-run China News Service, 27 people have been arrested so far in connection with the scandal.

The chemical was first detected in infant formula but has now been detected in dairy and other food products.

Chinese suppliers trying to boost output are believed to have diluted their milk, adding melamine because its nitrogen content can fool tests aimed at verifying protein content.

Health experts say ingesting a small amount of melamine poses no danger, but larger amounts of the chemical can cause kidney stones and lead to kidney failure. Infants are particularly vulnerable.

"In order to comply with local regulations and as a precautionary measure, we are recalling all packs produced ... from Hong Kong and Macau markets," the statement read.

The South Korea Food and Drug Administration said Tuesday melamine had been found in Nabisco Ritz cracker cheese sandwiches and in rice crackers made by Danyang Day Bright Co.

Melamine has now been found in six products imported to South Korea, including Misarang snacks made in China and in Chinese-made nondairy creamer imported from Hong Kong. South Korea has banned imports of all Chinese-made food products containing powdered milk.

In New Zealand, the Tatua Cooperative Dairy Co. on Monday stopped exports of the dairy protein lactoferrin, used mainly in baby formula, after tests showed it contained traces of melamine.

Tatua said a Chinese customer told its agent two weeks ago that melamine had been detected in its lactoferrin powder. Further tests in both China and New Zealand on Sept. 22 and 23 confirmed low-level contamination, chief executive Paul McGilvary said Monday.

Food safety officials are now investigating whether lactoferrin manufactured by Westland Milk products on South Island and Australia's Victoria state dairy company, Tatura, which uses the same process, are being contaminated with melamine by the manufacturing process it uses.
By Associated Press Writer Dikky Sinn