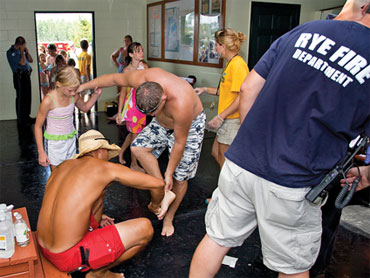 Make no mistake, at eight-feet long with 150-foot tentacles, they can be a real health hazard. That's something about 150 beach-goers learned the hard way on Wednesday when they  came into contact with a large dead jellyfish at a state park in Rye, N.H., authorities said.

The victims, including nine children ranging in age from 5 to 10, were being treated and released and were "all doing fine," Portsmouth General Hospital spokeswoman Christine Galli said.

What should you do if you come across the wrong end of a jellyfish's stinger?

The children were bathed in vinegar, which is a common treatment for jellyfish stings. They also were given antihistamines and anti-inflammatory medications.

Meat tenderizer is also said to be a good remedy for the pain, according to the Pacific Wildlife Foundation.

Wallis Sands State Park Manager Ken Loughlin said lifeguards at the park in Rye spotted the jellyfish, which he described as the size of a "turkey platter" and weighing nearly 50 pounds.

Lt. Charles Gallant of the Rye Fire Department said the jellyfish was "about the size of a trash can cover," and it started to fall apart when park staffers tried to remove it from the water.

Although the creature was dead, the stingers on its tentacles were still active. They can stay alive for three to four days after a jellyfish dies, Gallant said.

In the northern New England region, Lion's Mane jellyfish average 8 feet in diameter and can have tentacles as long as 150 feet. But the species is rarely seen so far south and in such shallow waters.

Just how bad is a Lion's Mane Jellyfish sting?

"They can hurt," Doug Grout, chief of marine fisheries for the state of New Hampshire, said of the stings. "I wouldn't say they're deadly, but they provide discomfort."