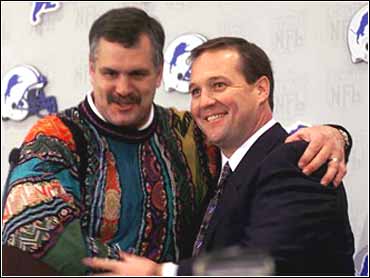 "The bar is high. The goal for this organization is to win Super Bowls," Mornhinweg said Thursday after becoming Detroit's third coach in three months.

Mornhinweg, 38, knows that he needs to be successful quickly because patience is in short supply with the Lions. They have won only one playoff game since winning the 1957 NFL title.

"There is very little grace period in this league," the former San Francisco offensive coordinator said. "There's virtually none."

Gary Moeller was fired along with his assistants to make room for the Mornhinweg and his new coaching staff.

Two team vice presidents have been fired and one has resigned since Matt Millen was hired to be president and CEO of the franchise two weeks ago.

Mornhinweg's hiring clearly shows Millen is in charge because team owner William Clay Ford wanted Moeller to stay for at least another season. But Ford didn't stand in Millen's way after giving him complete control of the team.

In fact, Millen was hired without meeting Ford, who is out of town.

"This isn't about me," Millen said. "I could care less about what kind of stamp this is. It's about winning, that's all that matters.

"Winning is the greatest deodorant."

The Lions refused to provide details about Mornhinweg's contract.

However, a football source speaking on condition of anonymity earlier said he agreed to a five-year deal. ESPN.com said the deal was worth $5 million.

"It's more complicated than that," Millen said.

The Lions were also complicated before Millen was hired because there was not one person in charge of the entire organization.

Detroit didn't have a general manager for the past 12 years, allowing coahces to make many decisions, and it had seven vice presidents in the front office.

The Lions always held news conferences in the Silverdome, but Millen and Mornhinweg made their debuts in a sparkling new Marriott Hotel just a couple miles away.

Mornhinweg was one of five considered for the job.

Millen had planned to interview Baltimore Ravens defensive coordinator Marvin Lewis after the Super Bowl and said rules that prohibited him from speaking to Lewis are unfair. Millen already had interviewed Moeller. Others considered were Herman Edwards, who was hired last week to coach the New York Jets, and Denver Broncos offensive coordinator Gary ubiak, who chose not to be a candidate for the job.

Mornhinweg, rumored to be headed to the Cleveland for months, canceled an interview he was scheduled to have Thursday.

Millen did not want him to get away without offering him the job.

"It's like when you meet the woman that you know is going to be your wife," he said. "We had to get it done."

Millen, who played on four Super Bowl champions with three teams, said the Mornhinweg comes to Detroit "with a great pedigree," in reference to his ties to Seattle coach Mike Holmgren.

Mornhinweg, who has never been a head coach at any level, replaces Moeller, who moved in after Bobby Ross resigned in November.

He spent the last four seasons as the 49ers' offensive coordinator after two years as an offensive assistant and quarterbacks coach for the Packers.

San Francisco coach Steve Mariucci thinks Mornhinweg can easily make up for his lack of experience on defense and as a head coach.

"It will be just like anybody else who gets an opportunity for the first time."