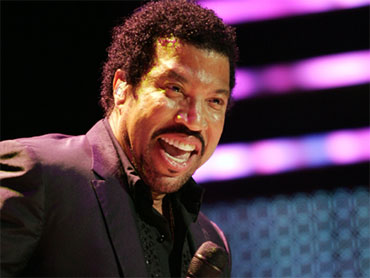 Lionel Richie got a little help from his former bandmates to close out the weekend's Essence Music Festival: Members of The Commodores joined him on stage to sing several of their hits, including "Brick House" and "Just to be Close to You."

The crowd remained on their feet through the nearly two-hour set and Richie's encore of "All Night Long."

The final night of the festival stretched well into early Monday at the Superdome, with performances by Richie, En Vogue, Teena Marie, Al Green and Maze, featuring Frankie Beverly.

Beverly and Maze have closed out the event each of the past 15 years. New Orleans Mayor Ray Nagin presented Beverly with the city's crystal star award.

Beverly, 62, simply said "thank you" and returned to doing what he does best - singing: "Now, we're gonna wear you out some more!"

Sunday's events started with inspiring gospel at the Morial Convention Center, along with honors for Bishop T.D. Jakes, the Dallas pastor who gave the sermon for President Barack Obama's inauguration.

"He's such a voice, such a man," gospel singer Smokie Norful said before singing a tribute.

"He's been such a phenomenal presence in my life through his preaching ministry, such a help to me from way back in the day and now, who knew I'd be on stage honoring him?" he said.

A sermon by Bishop Eddie Long of Atlanta and other performances by CeCe Winans, Kirk Franklin and Mary Mary highlighted the tribute.

Brian Courtney Wilson, whose release "Just Love" debuted at No. 2 on Billboard's gospel chart, said he was glad to have the chance to meet Jakes. "He's just larger than life and because he's poured into so many people's lives, having the opportunity to do so for him is just a blessing," he said.

Wilson and Shari Addison, a finalist of BET's gospel talent search show "Sunday Best," both performed in the festival's marketplace and signed autographs for fans.

Addison, a festival first-timer, said it's appropriate that Essence decided to organize such a tribute for Jakes, pastor of The Potter's House.

"His anointing is so great and powerful and he's always so giving. I always ask, 'Who cares for the caretaker?' and this is our opportunity to pour back into him," she said.

"I'm just having a blast," she said. "I can't believe I'm in the room with all these powerful people and now, these people are my peers. I just met CeCe Winans and she says, 'I remember you from the show' and I'm just so honored to be able to be a part of same ministry that she is."

Lisa Johnson of Atlanta commended Essence for producing the festival, which has drawn more than 2 million people since its inception in 1995 as a one-time celebration of the 25th anniversary of Essence magazine. Last year, the festival had a record-breaking 270,000 attendees.

"I think it's awesome that they can get people together to have fun and no fighting," she said.
By Chevel Johnson