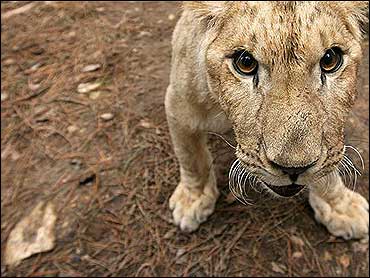 Authorities are investigating the mauling of a man by a lion at an animal refuge in western Kansas, but no charges are expected to be filed.

The lion's owner, Jeffrey Harsh, told authorities that the man was staying at a motel next to his refuge near Oakley and apparently made his way into an outer perimeter lion cage on Saturday.

When Harsh showed up to feed the animals that evening, he found the man with his arm over the top of a gate on the inner cage. Thomas County Sheriff Rod Taylor said a Barbary lion had grabbed the man's right arm.

Harsh reportedly beat the lion with a steel pipe so it would release the man, then drove the man to a hospital. The victim, Bradley Buchanan of Oakley, has since been transferred to a Denver hospital for more surgery and is expected to recover.

Taylor said photos of Buchanan's deep wounds appear to show that the lion reached the bone.

Harsh previously has faced legal problems for his ownership of exotic animals.

On Tuesday, the Thomas County prosecutor agreed to dismiss a misdemeanor case against Harsh, provided that he transfers three Barbary lions to the Detroit Zoo.

Zoo officials were expected to travel to Oakley within three months to make sure the animals are healthy before agreeing to take them.

Taylor said no charges are expected to be filed in Saturday's mauling, providing Harsh follows through on his promise to move the lions.

But Harsh still has two tigers at the facility.

"I hope we find a home for the other two," Taylor said.