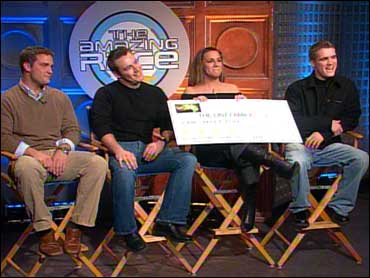 Competing for 25 days in 50 cities and being together for 600 hours paid off for the Linz family of Cincinnati. Four Linz siblings made a dash for the finish line Tuesday to beat two other teams and win the $1 million top prize in "The Amazing Race 8" on CBS.

It was the first time teams in the reality show consisted of families.

Nick, Alex, Tommy and Megan Linz have three other brothers, but were the only Linzes to take part.

They picked up their check on The Early Show Wednesday from "Race" host Phil Keoghan.

The plan is to give half the winnings to their parents, and split the rest among all seven siblings.

Also on hand on The Early Show were the two teams the Linzes edged out: the Bransens, who finished only minutes behind the Linzes in Niagara Falls, N.Y., and the Weavers, who were also right there at the end, finishing third.

The Weaver team was made up of a recently widowed mom, Linda, her two daughters, Rachel and Rebecca, and their younger brother, Rolly. They're from Ormond Beach, Fla.

On The Early Show Wednesday, co-anchor Harry Smith told the Linzes, "The thing, I think, that most impressed me as I watched you: you guys always seemed to be having a good time. Where does that come from?"

"I think it's in our nature as a family," Alex Linz said.

How tough was the last challenge, and were they nervous?

Turning to the Bransens, Smith asked Wally, "This came down neck-and-neck to this geography contest. Were your hands shaking at all?"

"It was a little nerve wracking. A little overwhelming," Wally said. "The board was very big. You had these big pieces. It was hard to get perspective. I could hear the girls, they were not trying to say too much to get me nervous, but on the other hand, they were encouraging."

And is his toe OK?

"Actually, after about another month, yeah, it was good," he said.

Smith noted that Wally "took some brutal looks from these girls through this race. There were a couple of moments where, as well as you played, you looked like you were carrying your father on your back sometimes!"

"You didn't see the looks he gave us. All right?" one of his daughters was quick to point out.

Added Lauren, "It was funny because, before we went on the race, he would harp on us about working out and making sure we were in shape. Before the race. And he was always like, 'I play basketball three times a week. I'm all set, girls. I'm in the best shape!' "

Apparently not, said Smith, who also added, "There is a lot of speculation that there might have been something going on between the Bransen girls and the Linz boys."

"Me and Lindsay are dating," quipped Tommy Linz.

Smith said that the Weavers "looked beleaguered, isolated ... There were plenty of times when you didn't look so happy. In terms of the real-life experience versus what we saw on TV, what was it like?"

"Well, it was a great experience," mother Linda said. "We just worked together and did our best."

Did the Weavers feel isolated from the other teams?

"Very much so," said one of the daughters.

"But," Linda added, "I think that was just part of it. We didn't really have that much time to spend together. Just every so often at the end of the legs. But we socialized. We were together."

"We said in the beginning we weren't going to go there and form all these alliances," Rachel said. "We were here as family, and this was our team, and we were just going to work together. If that it was portrayed as isolating ourselves, that's not what we meant to do."

There were a lot of mean-spirited things that were said amongst the Weavers about the other teams and vice versa, Smith noted, asking, "Did that spirit actually exist as you played day to day?"

"I would say it existed to an extent," Rachel said. "I mean, there is competition. There are things that will be said. Things that will be done. You're putting like the worst, stressful situations where emotions are going to come out, it is going to be very tense ... So it's inevitable."

The Weavers lost husband and father two years ago. Smith wanted to know if the family used the race to help "work through" that loss.

"I think after our dad died, our family was really messed up; not messed up, but we were just confused," said Rachel. "He was the leader of our family. We didn't know what our roles were. Being in the race, we had to accomplish different tasks and do different things. And I think that how we all took up our own roles and worked together really worked out well."

Turning to the Linzes, Smith wanted to know, when doing the puzzle, if they had the sense that they had the race in the bag.

"I recall opening the clue and kind of reading through," Alex Linz said. "I didn't really read the last line that said … 'Once you're done with this, we're on to the finish line.' I don't think I meant to do it, but I'm kind of glad I never told him that because I think it took a lot of weight off his shoulders."

The Bransens missed winning the big money by about three minutes.

"It was a great experience," said Lindsay Bransen. "I would say just being with them and the whole time being with our dad, just because we all live away from home, either at school or living in the city. So it's nice just to be with him and them and enjoy each other."

Later on The Early Show, host Phil Keoghan presented the Linzes with a check for $1 million.

"What I liked about these guys," Keoghan said, "was that they kept a sense of humor through the whole thing and having met their parents and stuff, you can see that's come from their parents. And so I loved watching them.

"For me, people said, 'You have favorites?' Well, yeah, I had favorites in the sense that I like teams that really enjoy themselves and just come on this race not to just win the money, not to just win every leg and be overly competitive, but have a good time."

Alex Linz said being in the race was the chance of a lifetime.

"When are you ever going to get a one in 10 chance to win a million dollars?" he said "When will you ever have someone travel you around the world on somebody else's bill? Especially coming from a big family, it's cool that we were able to do it together."

As Nick said after the Linz team had the check in hand: "It wasn't about the money. It wasn't about getting rich. It's a couple extra bucks that is going to help out, by all means."

Keoghan noted that, from what he has observed during his travels, Ohio is the biggest "reality state" in America. The close-knit Linzes are so deeply rooted in Cincinnati that they have over 50 first-cousins living in or near the city.

"People (in Ohio) are reality crazy," he said. "And I don't know if you heard them last night, but there were people in Ohio cheering."

After the race, the Bransens and Weavers went at it again, this time seeking to win a new SUV.