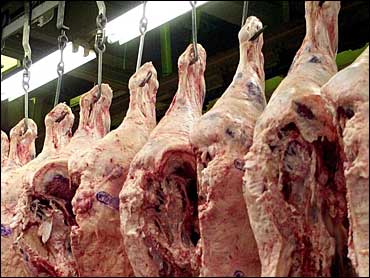 In feed lots across the country, beef cattle are given growth hormones to make them fatter faster, to save money.

Now questions are being raised about one of the most widely-used hormones, Zeranol, a synthetic estrogen implanted in cattle. A series of tests done for the Pentagon show a possible link between breast cancer and Zeranol.

In the lab, researchers at Ohio State University mixed beef from Zeranol-treated cows with human breast cancer cells and saw "significant" cancer cell growth -- in some cases at levels 30 times lower than the government says is safe.

Concerned about possible long-term effects, they write: "consumption of food ... derived from ... animals treated with Zeranol poses a potential health risk to consumers."

"We know that Zeranol and some of the synthetic hormones used in cattle production are estrogens, and we know that breast cancer is dependent upon estrogen," says Lou Guillette, a biologist at the University of Florida.

In his own research, Guillette examined the effects of hormones coming off cattle feedlots and getting into the water. The study, funded by the European Union, which bans beef hormones, found serious damage to the reproductive systems of fish downstream from a Nebraska feedlot.

"It certainly raises a red flag for us," says Guillette. "What it suggests is that there are very potent hormones that are coming off of these feedlots that are going into the environment."

Andrea Martin, the founder of the Breast Cancer Fund, says there needs to be more research into what women are exposed to that might be causing breast cancer.

"We feel there are preventable causes of breast cancer," says Martin. "In the last 50 years, it's almost tripled, and there's no reason to think it won't keep increasing."

As a breast cancer survivor, Martin says women in particular need to be aware of the risks.

"It's really a matter of women waking up and demanding to know what is in their products in their food. And what effect it has on their bodies," she says.

But the cattle industry says the minute amount of Zeranol found in beef poses no threat.

"My wife and my four daughters eat beef on a regular basis," says Gary Weber, of the National Cattlemen's Beef Association. "I've reviewed all this science, and I'm confident that beef is safe and wholesome for consumers.

Weber initially said levels of Zeranol found in beef were "57,000 times less, literally, than what the FDA has determined is safe."

However, a day after this CBS report aired, his organization said the figure was wrong. The levels of the drug are 5,700 less than what the FDA has determined is safe -- in effect, 10 times higher than the first estimate.

The manufacturer of Zeranol says the drug is FDA approved as "safe and effective" and adds, "there has been no demonstration that Zeranol affects the development of breast cancer in humans or animals."

The FDA tells CBS News it's waiting for the results of a major follow-up study which will track Zeranol levels in women and in store-bought beef.