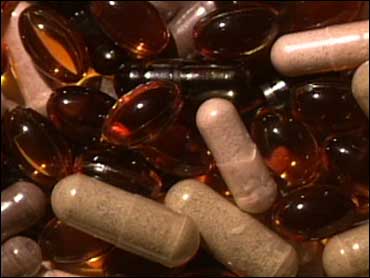 Men who take too many multivitamins may be increasing their
risk of dying from prostate cancer, according to new research from the National Cancer Institute.

Taking a multivitamin more than seven times a week was associated with a 30 percent increased risk of advanced prostate cancer and a doubling of the risk of death from the disease in the study.

Regular multivitamin use (one to six times a week) did not appear to increase cancer risk, and excessive vitamin use was not associated with an
increased risk of early, or localized, prostate cancer.

But there was also no evidence to suggest that taking multivitamins at any
dosage helped prevent prostate cancer.

"Based on our findings, we would recommend that men adhere to recommendations for dietary supplements and consult with their physician before taking supplements in excessive doses," he says.

The new research is one of several recent studies suggesting a potential
downside to vitamin supplementation in people who are generally well-nourished.

An analysis of 47 studies assessing antioxidant supplementation, published
earlier this year, found a slight increase in deaths among people who took
beta-carotene, vitamin E, or vitamin A supplements.

Christian Gluud, M.D., who co-authored the analysis, tells WebMD that there is little evidence of a benefit for antioxidant supplementation and mounting
evidence of potential harm.

"The idea that you can prevent disease by taking an antioxidant supplement
is very attractive," he says. "People want to believe it, and there is a great deal of marketing devoted to making them believe it."

No link was seen between multivitamin use and localized prostate cancer.

The increase in advanced and fatal cancers was seen in men who took
multivitamins more than seven times a week. The link was strongest among men
with a family history of prostate cancer and men who also took selenium,
beta-carotene, or zinc supplements.

Because the researchers had information on the use of some individual
supplements but not others, they were not able to identify individual vitamins or doses associated with increased risk.

The study appears in the May 16 issue of the Journal of the National
Cancer Institute.

In an editorial accompanying the study, Gluud and colleague Goran
Bjelakovic, both of Copenhagen University Hospital, offer an intriguing
hypothesis on the role of free radicals and antioxidant supplements in the
promotion and prevention of disease.

The thinking has been that antioxidant vitamins protect against diseases
like cancer and heart disease by reducing the free radicals that are thought to promote these conditions through oxidative stress.

But Gluud and Bjelakovic suggest that free radicals may do some good by
targeting and killing harmful cells, such as those that cause cancers to
grow.

Though just a theory at this point, Gluud tells WebMD that it is one that
deserves further study.

By Salynn Boyles
Reviewed by Louise Chang
B)2005-2006 WebMD, Inc. All rights reserved