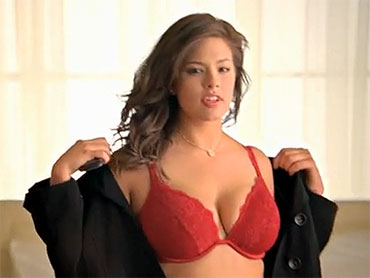 A plus-sized controversy is flaring over the initial refusal by ABC and Fox to run an ad for lingerie from Lane Bryant, the maker of clothes for plus-sized women.

At first, ABC wouldn't air it on "Dancing with the Stars," and Fox refused to show it on "American Idol."

Now, both are apparently going to broadcast it -- but only during the later portions of the shows, outside the time considered too early to run racy material.

Charges, counter-charges and denials have been flying in all directions, with Lane Bryant claiming that a double standard is being applied, since commercials for Victoria's Secret (featuring thinner models in similarly skimpy attire) do run in earlier time slots.

On "The Early Show on Saturday Morning," Graham said it all smacks of discrimination against plus-sized women.

"It's actually sad" that the Lane Bryant ads will run, but not until the so-called Family Hour is over, she told co-anchor Chris Wragge. "I know there's plenty of women my size watching 'American Idol,' watching 'Dancing with the Stars' who would love to see what they look like on the television screen. And I feel bad for the plus-women out there who can't see that, and that has to be, like, part of a discrimination."

Graham observed that, "Victoria's Secret commercials are airing all throughout the day, but when it comes to a Lane Bryant commercial, we have a little bit of extra, you know, overflowing, and then everybody freaks out."

Does she think it was because "there's too much of you?" Wragge asked.

"I think so," Graham replied.

Wragge wondered if the content of the ad, in which Ashley is seen scheduling a rendezvous with "Dan," might have been inappropriate: "You're texting your boyfriend in your underwear. Do you think maybe there was a more underlying message that they wanted to stay away from?"

"I don't think so," Graham responded, "considering that the Victoria's Secret models flaunt around and dance around wearing basically nothing, and then for me just to be getting ready to go see my boyfriend in my lingerie, I don't see much difference between the two stories."

Graham said it never entered her mind her ad would cause such a dustup.

"Oh, my goodness!," she exclaimed. "I was so honored to be part of the commercial, to represent women of my size, that we can be confident and sexy in our lingerie, and to have it on television."

The flap over the ad is "actually hilarious to me, considering all the press that plus girls have been getting lately. We've been naked in all different kinds of magazines. I'm naked in Oprah magazine this month. And this is a much bigger story than that?. It's very shocking to me."

Could it be Lane Bryant knew what would transpire and did the ad for the attention?

So no ulterior motive on Lane Bryant's part?

"I have no idea," Graham answered. "I haven't actually asked that."

"Their statements are not true. The ad was accepted to run in "Dancing With the Stars." Lane Bryant was treated absolutely no differently than any advertiser for the same product. We were willing to accommodate them, but they chose to seek publicity instead."

"Lane Bryant submitted the lingerie ad for the 8 PM hour of "American Idol." Because the 8 p.m. hour is considered "family hour," we requested they make some edits. Lane Bryant refused and they didn't want to change the ad. We did agree to run the ad on the 9PM hour. Fox has scheduled to run the ad this Wednesday, April 28th during the 9 p.m. hour."

Lane Bryant released a memorandum from ABC, Inc. rejecting its Cacique ad from a number of programs including Dancing With The Stars.

"ABC's statement that 'Lane Bryant was treated absolutely no differently than any advertiser for the same product' is simply not true. It was only after we got the rejection and raised the fact that they were operating under a double standard that they reluctantly agreed to put us in the last pod of the program. The Victoria Secret ads, which had aired on Dancing With The Stars prior to the date our ad was rejected were not subject to the same restrictions. We have records of their ads airing in earlier time slots," a Lane Bryant spokesman said.

"There was absolutely no rationale for us to be relegated to the back of the bus, when our ads were no more risqué than those of Victoria Secret. The only difference is the size of our models. We would have expected better from a company owned by Disney," the spokesman for Lane Bryant added.