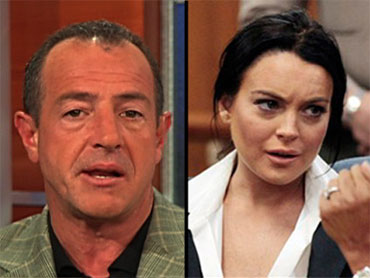 Things don't seem to be getting any better for Lindsay Lohan. In fact, they could get a lot worse. Today she's scheduled to appear in a Los Angeles court for violating her probation, the result of a 2007 DUI arrest.

Lohan could end up behind bars today when Judge Marsha Revel decides her punishment for probation violations. The starlet failed to attend several alcohol education classes and missed a May 20th court date. At the time Lohan was at the Cannes Film Festival, promoting an upcoming movie, and was also caught partying by paparazzi cameras.

Rob Shuter, an entertainment columnist of Popeater.com, told CBS News, "Something is definitively going to happen today. Even if Lindsay doesn't go to prison she's in very very hot water."

Last month, her court-ordered alcohol-monitoring bracelet went off while she was attending an MTV Movie Awards party. Lohan tweeted that she was recently punched in the face by a waitress at a Los Angeles Club. And her personal life has made headlines with speculation that she has a new Israeli girlfriend, Eilat Anschel.

Now she could find herself spending at least some time in jail.

Shuter said, "If she goes to jail it won't be for long though the consequences that this will have on Lindsay's career is once again going to be terrible."

Lindsay's father, Michael Lohan, plans to be in court today. Previously, he pressed the court to set boundaries for his daughter. In letters he's asked the court for random drug and alcohol testing. And now, concerned about drug abuse, wants the court to order Lindsay into rehab.

Michael Lohan and his lawyer, CBS News legal analyst Lisa Bloom, plan to be in court Tuesday as Lindsay faces a judge for allegedly violating her probation stemming from a pair of arrests in 2007.

In an exclusive interview with "The Early Show" Michael Lohan told "Early Show" co-anchor Erica Hill Lindsay isn't taking things as seriously as she should.

"In the past she hadn't (taken things as seriously)," he said, "and I think since the bracelet put on, I think the constraints have been the ones she needed and she's taken better steps than she was before."

Hill pointed out to Michael, "You and your daughter have that had had a rocky past. When's the last time that you spoke with her and have you brought up any of these issues with her?"

Lohan replied, "The issues have been brought up between myself, my other children, who I'm in constant contact with. It's not matter of to me -- I really don't believe Lindsay needs to be in jail, but I think the only alternative, and I wish the judge would mandate Lindsay to a rehab where she can get off the prescription drugs. Because regardless, that's the problem and I'm not going to have my daughter back nor where anyone else have the Lindsay Lohan back that they knew and loved until they're out of her life."

Hill pressed Michael Lohan about what kinds of drugs Lindsay might be abusing.

Michael responded, "So many doctors have prescribed her so many different things that she never was on and never needed and now she's on them. I couldn't tell you all the names, but Adderall, for one. Adderall is nothing but methamphetamine. For anyone that knows the pharmaceutical business or knows what kids are into these days, adderall is taking over society. It's supposed to an focus medication, but it's speed. And it's polluting society and our teenagers and kids."

Bloom noted she wrote a letter to the judge on behalf of Michael Lohan pleading that she be sent to rehab instead of jail.

Bloom, who appeared on the broadcast with Michael, said, "The first question the judge has to address is was Lindsay in violation if she missed some alcohol education classes a few months ago and when she missed that had court date when she was in Cannes. So the court will have to make a factual finding. If the court finds she was in violation, then question is what happens to her. The state wants her to be incarcerated. Lindsay wants nothing to happen to her and Michael and I have struck a middle position asking the court to continue the controls on her that the court ordered last time around. The random drug tests, the SCRAM bracelet, the no-alcohol order."

Bloom concluded, "Ultimately she needs to go to rehab. I think we all agree with that. Even if she's incarcerated, it won't be for very long because of overcrowding in L.A. jails. Minor offenders like Lindsay are in and out. The last time she only served 84 minutes, so that it serves no purpose. What she really needs is rehab."

So will Lindsay show up at court today?

"I'd be very surprised if she didn't show up," Bloom said.

Michael Lohan interjected, "She better after I got up at 3:00 in the morning to do this show and come out here."

Hill asked Michael where his relationship stands with Lindsay.

Michael said he's contacted when "something horrible comes up in her life
"As recently as with the situation with this girl jasmine that did, in fact, hit her. Other people have told me that," he said. "But that's needless to say. Lindsay is my daughter. I love her to death. I don't care if we don't have contact at this point. I mean I really wish we would, so I can speak to her face-to-face and tell her what I feel and what I think is best for her, but I'm going to do what I have to do as a father and this isn't one of the things. Lisa (Bloom) asked me to come on and do this. I just want to sit alone with her in a room and just get her to understand that she's not herself, and doesn't have the life she needs or that she wants."

He continued, "When people are put on prescription drugs, they don't even realize, they think the drugs they're on is what needed in their life to control them and Lindsay doesn't need them. She was put on for the wrong reasons, and she's addicted to them and she's got to get off them."

CBS News reached out for comment from Lindsay Lohan and her attorney, but did not receive comment.