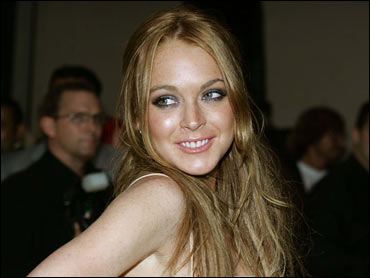 Lindsay Lohan says she wants to go to Iraq with Sen. Hillary Rodham Clinton and entertain American troops there.

"I've been trying to go to Iraq with Hillary Clinton for so long. Hillary was trying to work it out, but it seemed too dangerous," the 20-year-old actress says in an interview in the September issue of Elle magazine, on newsstands Wednesday.

Lohan, whose screen credits include "Freaky Friday," "Mean Girls" and the upcoming "Georgia Rule," says she hoped to emulate Marilyn Monroe, who performed shows for about 100,000 troops stationed in Korea in 1954.

"It's so amazing seeing that one woman just going somewhere, this beautiful sex kitten, who's basically a pinup, which is what I've always aspired to be," Lohan tells the magazine, adding that she would prepare for her trip to Iraq by taking shooting lessons with her security guard.

A spokesman for the senator offered a slightly different take on Lohan's contact with the New York Democrat's office.

"It was suggested to her that if she wanted to go, she could pursue doing so through the USO," said spokesman Philippe Reines.

The United Service Organizations is a nonprofit organization that provides entertainment to troops stationed abroad.