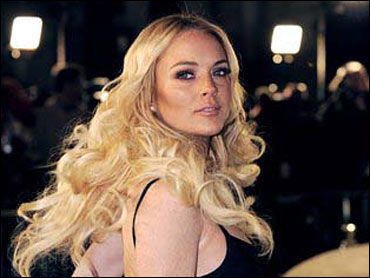 Actress Lindsay Lohan is taking a baby step back into the Hollywood mainstream this weekend with her first movie in three years. She has a small part in the new film "Machete," which opens today.

But can "Machete" cut-through all the bad press Lohan has gotten this year?
It remains to be seen whether Lohan can escape her recent past through an escapist movie.

"Early Show" Special Contributor Nancy O'Dell reported on the broadcast Friday that the stars rolled-up in style for the Los Angeles premiere of "Machete." But Lohan was a no-show.

Lindsay Powers, deputy online editor of The Hollywood Reporter, noted, "Lindsay had been asked not to be there because her personal problems would distract from the actual film."

Still, Lohan's fellow filmmakers say her performance in "Machete" is a razor-sharp comeback.

Robert Rodriguez, director of the film, said, "I can't wait for people to see it, because it'll remind them, 'Oh yeah, there's an actress behind all the distractions and the paparazzi.' That's why she got there to begin with."

Lohan's latest legal troubles began less than a year ago. She showed up more than hour late to her Beverly Hills probation hearing.

And it got even worse. In July, she was a no-show for an appearance, and was sentenced to 90 days in jail and 90 days of rehab. She served only a fraction of those sentences.

But Powers said Lohan is paying a heavy price in her career.

She said, "If she really does want to focus on her career, she needs to surround herself with smart advisers, smart people who can help her choose a role that's not a troubled personal back-story, so that she can actually achieve that career comeback she wants."

It's easy to forget that, before her run-ins with the law, Lohan was a much-loved star with endless potential. But dressed as a nun and toting a gun in "Machete," O'Dell said, might do little to remind audiences of Lohan's skills as an actress.

Powers said, "In this movie, she has threesomes with her mother, she's naked for a big chunk of time. She has a scene where her father picks her up from a drug den. So, it's really hard to separate her real life and her acting right there."

O'Dell offered, "So you're really not going to be focusing on her performance."

O'Dell remarked that it's especially hard to revive a film career when it's on what some are calling the Hollywood equivalent of "life support." O'Dell said Lohan's last movie, "I Know Who Killed Me," was one of the most notorious flops of 2007.