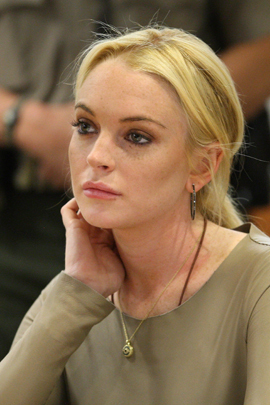 (CBS/AP) LOS ANGELES - Lindsay Lohan will be back in a Los Angeles courtroom to face a crucial court hearing where prosecutors will present some of the evidence they have against her in a felony grand theft case over a necklace.

Lohan, 24, has pleaded not guilty to taking the necklace and her attorney Shawn Chapman Holley has said the actress is innocent.

The preliminary hearing on Friday will feature testimony about Lohan's reported theft of the necklace valued at $2,500 from the upscale jewelry store, Kamofie & Co. in January. Lohan's attorney has indicated she plans to challenge its value.

The actress has rejected two plea deals offered by prosecutors and a judge that included guaranteed jail sentences.

Kamofie & Co. reported the necklace was stolen roughly three weeks after Lohan was released from rehab at the Betty Ford Center and while she was on probation for a 2007 drunken driving case. The judge who first handled this case has said he thinks Lohan violated the terms of her release, but has assigned the preliminary hearing to another jurist.

The new judge, Stephanie Sautner, could send Lohan to jail after Friday's hearing if she determines there is enough evidence to support the probation violation.

Lohan has been jailed before, but was released early due to jail overcrowding. She has also been in a courthouse fixture since last May when she missed a hearing in her drunken driving case. Since then, two judges have sent her to jail twice and rehab twice.

On Wednesday, Fiore Films announced they have cast Lohan in movie, "Gotti: Three Generations," where she will play the wife of John Gotti Jr., the son of the infamous mob boss dubbed the "Teflon Don," in a biopic of the family. The film is scheduled to begin shooting later this year in New York, Lohan's native state.

"I'm really excited to be back on set and clear up all the misinterpretations about me and show this is what I love to do," Lohan said in an interview with The Associated Press. "I've learned a lot. I've lived a lot. When I'm on set, it's about the film."