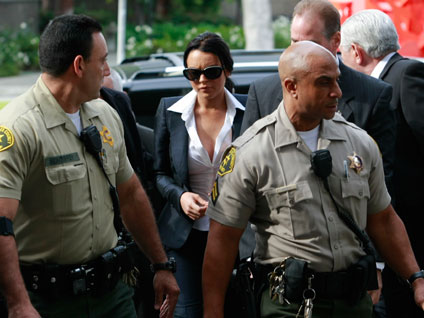 BEVERLY HILLS, Calif. (CBS/AP) Lindsay Lohan has lost a bid to ease restrictions involving drug and alcohol testing so she can attend a film shoot in Texas.

The actress, wearing a dark gray suit, appeared somber and concerned Monday in a Beverly Hills courtroom when she conferred with her lawyer about the plan for attaching an alcohol-monitoring bracelet to her ankle and requiring drug testing every week in the Los Angeles area.

Lohan's attorney, Shawn Chapman Holley, told the judge Lohan is beginning to film of a movie in Texas, but the judge suggested the actress may have to delay the project.

Lohan said in an interview before the hearing with Hollywood.TV that she doesn't think she deserves jail or rehab.

"I don't see what reason I would go to prison for. I've been more than compliant with everything having to do with the court system," the actress said in the video interview released Monday.

When asked if she should go to rehab, Lohan replied, "I don't see why I would even have to do that, considering I've been in compliance with everything that occurs when you're in the court system for two DUIs."

The actress was due in court on May 20 for a progress report on her probation stemming from the two arrests in 2007. She claimed a stolen passport prevented her from leaving Cannes, France, in order to get to the hearing.

"I had no option but to stay there. I immediately was trying to find ways out," she said in the interview.