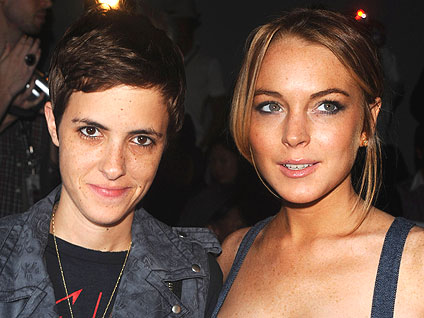 NEW YORK (CBS) Lindsay Lohan got a little comfort from a familiar source amid all her legal troubles.

The "Mean Girls" star, who is about to serve a 90-day jail sentence stemming from probation violations, reunited with her former girlfriend Samantha Ronson for a casual dinner date.

According to E! Online, after being separated since last year, the two were spotted together eating sushi at Matsuhisa in Beverly Hills on Sunday. Following dinner, the two drove to Lohan's condo in West Hollywood.

Lohan, 24, may be using Ronson, 32, for some company and guidance since she was sentenced to 90 days in jail on July 9 for violating her probation in her 2007 drug and alcohol case. She was sentenced because she missed alcohol education classes.

Ronson went on Twitter July 9 to defend Lohan after Joan Rivers tweeted that the actress was "so dumb." Ronson responded, "Hey Joan Rivers- you have collagen older than Lindsay, pick on someone your own age, oh wait, I guess people that old can't hear. #bully"

To which the controversial star replied: "thank you. ;)"

Lohan is expected to surrender on July 20. Also, the actress is slated to finish a 90-day inpatient substance abuse program after her release.