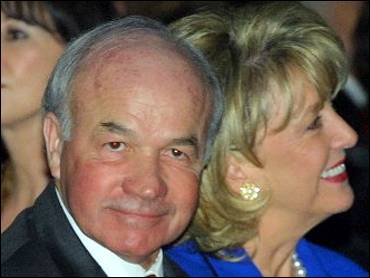 You can now get a little piece of former Enron chief executive officer Kenneth Lay's life — if you can afford it.

Part estate sale and part yard sale, the store last week quietly began allowing browsers to peruse the inventory — much of it originally paid for with Enron money.

"It would sort of be like Marie Antoinette opening up her house to sell her wares, hoping to save her neck," said Charles Mercado, a part-time antiques dealer who visited the store Tuesday.

Potential customers were greeted by a uniformed Houston police officer as they entered the door Tuesday and then by Lay family spokeswoman Kelly Kimberly.

The store hasn't officially opened but is doing business with those who show up. Kimberly told people that if they found an item without a price to just ask and one could quickly be found.

Kimberly said Lay's decision to open the store has nothing to do with the family's perils since the downfall of the energy trading company her husband once headed.

"This is just a practical way to utilize all of their furniture and to utilize this building, which is one of her real estate investments," the family's spokeswoman said. "She realized it was just stuff and other people might have a use for it."

The stuff on sale includes items from India, Europe and China. While a majority of the items are priced far beyond a few hundred dollars, browsers can buy a perfectly formed set of two shells and a sand dollar for $100 or a card set for $30.

"Hopefully she has got better stuff than that," said Mark Swindler, who browsed the store with a friend Tuesday afternoon. "I really thought there would be all these decadent, lavish furnishings."

Some small U.S. flags go for $1.25 for those who just want to say they bought something from the store, which is stocked with surplus items from the family's vacation homes and other properties.

"It's just stuff all right," Swindler said, "stuff they got by ripping off other people."

The family's longtime interior designer teamed up with Lay and her daughters to put the store together. Kimberly said it has been a longtime dream of Lay's to have her own antique and design store.

Although Lay was readily available to answer customers' questions about her merchandise, she wouldn't talk with reporters who arrived at the store other than to introduce herself.

After Enron descended into bankruptcy Dec. 2 — causing many Enron employees to lose their jobs and their life savings — the Lays began selling off assets. Kenneth Lay resigned as chief executive in January and the couple jettisoned homes in Aspen, Colo., and Galveston, Texas, along with commercial properties.

"Her troubles appear to be bigger in scale, even though they are the same as anyone's," Mercado said. "She's somewhat against the wall. It is sort of tragic really.

"I am sure there would have been a time when this wouldn't have been her fantasy. But I guess if having a resale shop was her fantasy, this is a good way to end."