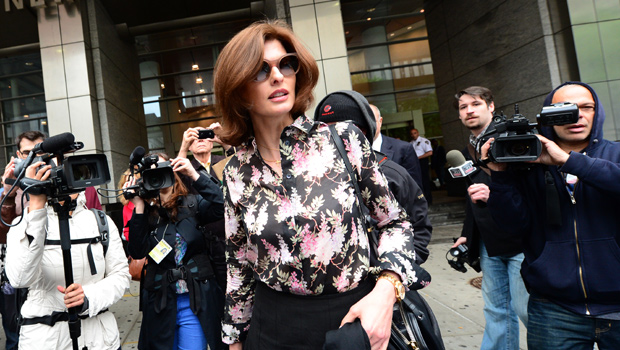 She wants a court to make him pitch in for child-rearing expenses she has tallied at nearly $50,000 a month -- for armed bodyguards and a round-the-clock nanny, among other costs.

The first day of testimony included a detailed description of a $12 million mansion and Pinault discussing his brief breakup with Hayek before their 2009 marriage.

Evangelista, the 1980s and 1990s magazine-cover fixture who famously quipped that supermodels "don't wake up for less than $10,000 a day," looked on with somewhat anguished poise in a demure black knee-length skirt, flower-patterned blouse and tan stiletto pumps.

At one point, she let out a faint, frustrated "ohhhhh!" and raked her hair with her hands when Pinault's lawyer, David Aaronson, said she was looking for $46,000 a month. While that's what she said she's spending on the child, Evangelista's lawyer said Thursday she isn't asking for any particular amount.

Although she willingly paid all the boy's expenses for most of his life, her roughly $1.8 million-a-year income took a major hit last year as a contract with L'Oreal ended, said her lawyer, William Beslow.

"It became necessary for her to go to the bullpen and ask the father for help," he told the court. "Ms. Evangelista is not looking to piggyback the lifestyle of Mr. Pinault."

But Pinault's camp says the supermodel is doing just that. A potential $46,000-a-month tab is "just ridiculous," Aaronson said.

Evangelista, now 46, and Pinault, 49, dated in late 2005 to early 2006, though he testified Thursday that the trans-Atlantic couple spent only about seven days together over that time.

Pinault is the chief executive of PPR, which owns Gucci, Yves St. Laurent and other luxury brands. He makes about $4 million annually from a complex of his family's companies; Forbes recently estimated the family's net worth at $13 billion.

Evangelista didn't publicly identify Pinault as the father of the boy, Augustin, known as Augie, until last year, when she went to court against the businessman. In the meantime, he and Hayek had a daughter, Valentina, and later married.

When Evangelista told Pinault she was pregnant in early 2006, it wasn't welcome news to the businessman, who had two children from a previous marriage. When asked Thursday if he thought Evangelista had tried to get pregnant, Pinault replied, "I guess so."

Beslow said Pinault indicated he'd prefer her to abort the child. Pinault testified Thursday that he told her he wasn't in a position to parent a baby but respected her decision to have the child.

"She told me that if I didn't want to be involved in raising the kid or stay together and be parents together, she would understand, and she will take care of the kid," the soft-spoken Pinault told the court, testifying in English. "I told her that I would recognize the baby ... and I will take my responsibility."

But he found her initial child-support proposal unreasonable, so he presented a counteroffer in 2007 but got no response until she sued last summer, he said. He has since paid an undisclosed amount, but he acknowledged that he had contributed virtually nothing until then.

"I'm not going to pay money I'm not asked for," Pinault said.

His and Hayek's 4-year-old daughter, Valentina, meanwhile, has been taken on a $52,000-plus 12-day vacation to Bora Bora and has a $12 million Los Angeles home in a trust for her -- a step Pinault said he took to reassure Hayek she and the girl would have a home if the couple parted. A brief premarital split in 2008 "created a high level of anxiety to my wife," he explained.

Evangelista was expected to testify later in the trial. At the end, the judge will make a ruling that the couple could accept or ask to be reconsidered.