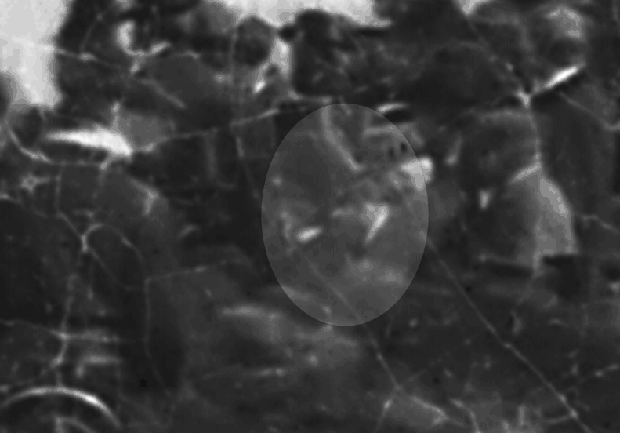 Christopher Oakley has made a living as a Hollywood animator and he gets pretty animated when talking about his favorite historical figure.

He recalls, as a 5-year-old in Chicago, staring at the classroom portrait of Abraham Lincoln and feeling a special bond with the bearded president. In high school, he made his first animated short film about the assassination of Lincoln (starring G.I. Joe). And his topic for a clay animation project in college? The Gettysburg Address.

So it perhaps should come as no surprise that Oakley, a Lincoln fanatic with a trained animator's eye, made a remarkable discovery in March while scrutinizing a high-resolution photograph taken by Alexander Gardner on Nov. 19, 1863 at Gettysburg.

"Even though (the photo) was in horrible shape, I could see what looked to me like Lincoln's profile," Oakley told CBSNews.com "I jumped from my desk and shouted 'no way!'"

Oakley, a former Disney animator who teaches new media at the University of North Carolina-Asheville, says he made his discovery during a lengthy student project to recreate the iconic speech in 3-D animation. In order to identify the faces in the crowd, he employed special animation software, satellite maps and trigonometry to recreate exactly where people were positioned on that historic day.

One of his first goals was to locate a man who was documented as being nearby Lincoln on that day: William Seward, his secretary of state. Seward had already been positively identified in a separate photo taken by David Bacharach. Using that reference point, Oakley was able to zero in on the location of Seward in Gardner's photo, which apparently showed the Cabinet member from a different angle. Oakley overlaid a profile image of Seward over the figure and "it matched perfectly."

Oakley then looked at Gardner's second image (the photographer took a pair of stereoscopic images) and noticed that Seward was still there but someone new had entered the frame: a bearded figure with a top hat. He again overlaid a well-known profile image of Lincoln (also taken by Gardner). It lined up perfectly.

Oakley says Lincoln was not the only remarkable discovery he made in the photograph. The animation professor says that his scan of the right side of Gardner's image shows another figure posing in the lower right corner: Gardner himself. Oakley is confident the photographer is "doing an Alfred Hitchcock cameo" because Gardner is pictured in a separate National Portrait Gallery image wearing the exact same suit. That would mean that an assistant, not Gardner himself, took the photo credited to Gardner.

"It was very CIA," says Oakley of his lengthy forensic quest, which is featured in the October issue of Smithsonian magazine.

But Oakley is not the first to lay claim to identifying Lincoln in the same photo. In 2007, Civil War photography expert John Richter excited history buffs by proclaiming that he had identified the president - but Richter identified a different figure, a man on horseback, saluting the troops before delivering his famous address.

Bob Zeller, Richter's colleague at the Center for Civil War Photography, says Richter's Lincoln and Oakley's Lincoln both bear remarkable physical resemblances to the former president. But Zeller says that the known facts of the day suggest that the man on the horse - not the one Oakley found - is indeed Honest Abe.

Zeller says very little is known about the moments before Lincoln delivered his iconic speech but there are two documented facts: first, Lincoln was wearing white riding gloves that day; second, he paused to acknowledge the salute of the troops on his way to the speaker's stand.

These facts, Zeller says, are reflected in the Lincoln identified by Richter six years ago.

"I just happen to think that the story behind our Lincoln makes more sense," Zeller told CBSNews.com.

But Oakley says there are holes in that story. For one, the animation professor says, the high-resolution of the image shows the man on the horse is wearing epaulets and is therefore in the military (Zeller calls this contention "ludicrous"). Further, Lincoln is saluting with his left hand - Oakley says that presidents did not salute officers at all back then and if they did, it would certainly be with their right hand. (Zeller says Lincoln is probably not saluting per se, but acknowledging the soldiers).

Oakley also takes issue with the physical characteristics of the man on horseback. Among his claims: the man's hair is too long, his beard too full and his neck too short. How does Oakley know this? Because Gardner took photographic portraits of Lincoln 11 days before the Gettysburg address, which clearly show the details of the president's countenance.

Oakley says he took his findings to Richter and Zeller and a "spirited debate" ensued about the merits of each Lincoln. While they disagree, Oakley is quick to point out that his counterparts graciously opened their doors to him and provided valuable information about Gettysburg on that day. As for Zeller, he says that Oakley has done "wonderful work" and concedes that "neither of (the Lincolns) can be proven beyond the shadow of a doubt."

As the 150th anniversary of the famous speech approaches, both sides welcome the debate.