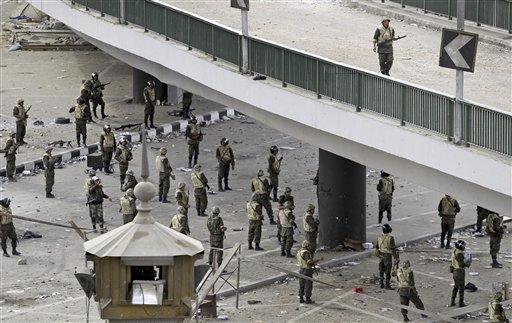 WASHINGTON (AP) - The Pentagon has often boasted of close ties to the Egyptian military, but in the current crisis the payoff from billions in military aid and three decades of U.S. mentorship isn't direct leverage.

Mostly, it's meant an ability to get Cairo's top defense officials on the phone.

U.S. military officers argue that deeper, more subtle benefits have derived from 30 years of cooperation between the two militaries, including a degree of discipline and professionalism by the Egyptian army that has helped keep its soldiers from attacking protesters seeking to topple President Hosni Mubarak. But other factors, including political direction, also influence the army's behavior.

On Friday the military took a more active role in providing security on the streets of central Cairo, where tens of thousands stepped up their protests.

At the same time, officials acknowledge that the U.S. military's influence is limited in circumstances that call for political, rather than military, solutions.

"We're not counseling them; there is no finger-wagging here," said Navy Capt. John Kirby, spokesman for the top U.S. military officer, Adm. Mike Mullen, who spoke briefly by phone on Monday and Wednesday with his counterpart in Cairo, Army Lt. Gen. Sami Enan.

Enan was in Washington last week for meetings at the Pentagon, but his delegation cut its visit short and returned home as the crisis grew more perilous last Friday.

Mullen on Friday cautioned Congress against rushing to halt U.S. military aid, reflecting the long-held view that it provides important leverage. He told ABC's "Good Morning America" that he would "caution against doing anything until we know what's really going on." And in an appearance Thursday on Jon Stewart's "The Daily Show" on Comedy Central, the Joint Chiefs chairman said Egyptian officials had assured him the military would not fire on protesters.

The military has largely stayed out of the clashes, perhaps judging that to intervene more directly could make matters worse.

Haim Malka, a senior Mideast expert at the Center for Strategic and International Studies, was even more forceful about not cutting off military aid, predicting that the Egyptian military will play a central role in shaping the contours of a post-Mubarak government.

"The United States' ability to influence that system is already limited," Malka wrote in a commentary Friday. "Freezing military aid now undermines what leverage the U.S. government does have to promote a post-Mubarak system that is more than just a reconfiguration of the status quo."

Many aspects of the training the Egyptian army has received from U.S. officers over the years are not directly relevant to the current crisis featuring vicious clashes between pro- and anti-government protesters with police forces doing little to stop them.

At its core, the purpose of U.S. military assistance to Egypt has been to preserve its peace deal with Israel, although U.S. officials in recent years have tried to steer the Egyptians toward a focus on countering Islamic extremist forces.

None of that suggests the U.S. military has great influence.

Kirby said Mullen has offered no advice to the Egyptians, neither urging them to counsel Mubarak to resign nor asking them about specific military plans for dampening the street violence. Instead he has sought simply to keep the lines of communication open and, by praising the military's restraint, make clear that Washington expects them to continue to avoid a harsh crackdown.

President Barack Obama appeared to be sending a similar message to the military when he said Tuesday, "I want to commend the Egyptian military for the professionalism and patriotism that it's shown thus far in allowing peaceful protests while protecting the Egyptian people."

The Egyptian military is the power base of Mubarak's regime. He's a former air force pilot. The army ousted the monarchy soon after it seized power in a 1952 coup, and all of the country's presidents since have come from the ranks of the military.

The current scope of U.S. military assistance began with the signing of Egypt's landmark peace treaty with Israel in 1979. It totaled $1.3 billion last year and includes air, land and naval support.

Egypt is just one example of how the Pentagon has sought over time to improve its standing with foreign militaries by selling them U.S. weaponry, providing long-term technical support, holding joint exercises, having regular face-to-face meetings at senior levels, and bringing junior and mid-level officers to the U.S. to attend institutions like the National Defense University and the Army's Command and General Staff College. The curriculum includes instruction in human rights, the principle of civilian control of the military, the U.S. Constitution and other elements of democracy.

The theory is that such interaction will make foreign military leaders more inclined to accept U.S. views on the proper role of a military in society.

Pentagon officials have often cited Pakistan as an example of how this influence can be lost or diminished when military-to-military ties are severed, as they were in the 1990s as a punitive U.S. response to Islamabad's development of nuclear weapons. That left the U.S. military struggling to rebuild trust and regain influence among Pakistani military officers when the Bush administration launched its war on terrorism after the 9/11 attacks.

Egypt is a particularly important U.S. ally because it was the first Arab nation to sign a peace treaty with Israel and remains an important player in broader Arab-Israeli peace efforts. Mubarak attended ceremonies in Washington in September marking a resumption of Israeli-Palestinian peace negotiations, and he hosted the first formal round of talks shortly afterward in Egypt.

By controlling the Suez Canal, Egypt also plays a key role in the movement of world oil supplies.