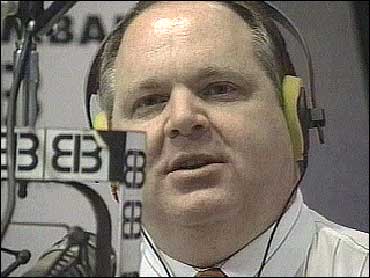 Limbaugh was rushed to a Honolulu hospital Wednesday during a vacation.

Guest host Walter E. Williams described Limbaugh's pains as similar to the feeling of a "heart attack coming on." But Williams said doctors haven't confirmed whether the 58-year-old had a heart attack, and more exams were planned Thursday.

"Rush continues to rest very comfortably in a hospital in Honolulu this afternoon - actually it's morning out there," Williams said. "He had a comfortable night and he's getting good medical attention."

Photos: Rush Limbaugh
Photos: The Famous and Their Feuds
Photos: Celebs in Rehab

Williams, an economics professor at George Mason University, was already scheduled to fill in on Thursday while Limbaugh was on vacation.

Kit Carson, Limbaugh's chief of staff, told The Associated Press Limbaugh left for his Christmas vacation on Dec. 23 and was due to return to his show Jan. 4. Carson didn't have any information on whether that schedule would change.

Limbaugh was rushed to the hospital for medical treatment earlier that day. The statement said "Rush was admitted to and is resting comfortably in a Honolulu hospital today after suffering chest pains."

Limbaugh broadcasts from his mansion in Palm Beach, Fla.

Honolulu television station KITV reported that paramedics took Limbaugh to The Queen's Medical Center in serious condition from the Kahala Hotel and Resort.

The report said that Limbaugh was seen golfing at Waialae Country Club - a country club next to the hotel - earlier this week.

With his sarcastic putdowns of liberal policies, parodies and self-promotion, he began capturing conservative listeners in the 1980s and grew to become the highest-rated radio broadcaster in the U.S. Recently, he's found a renewed purpose and has boosted ratings by railing against Barack Obama's presidency.

His three-hour weekday show is heard on some 600 radio stations across the country, and more than 14 million people listen to him at least once a week.

Americans said in a poll last month that Limbaugh was America's most influential conservative voice.

In 2001, Limbaugh reported he had lost most of his hearing due to an autoimmune inner-ear disease. He had surgery to have an electronic device placed in his skull to restore his hearing.

Two years later Limbaugh acknowledged he was addicted to pain medicine. He blamed the addiction on severe back pain, and took a five-week leave from his radio show to enter rehab.