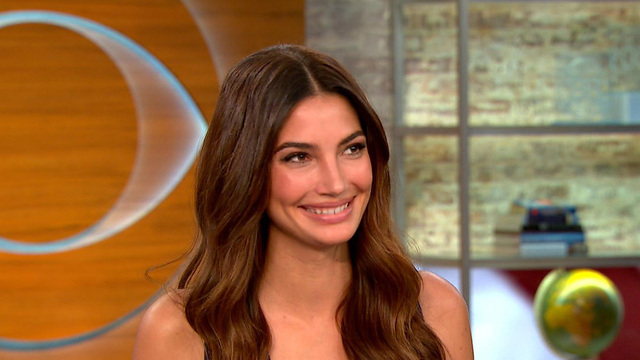 As a child, Lily Aldridge was once a tomboy soccer player who thought she would make the women's national soccer team, until one chance encounter at a school carnival.

A woman who owned a modeling agency was at the event with her kids and spotted the then 14-year-old Aldridge. Years later, the supermodel is now rocking runways around the world and has starred in advertising campaigns for brands like Carolina Herrera, Stuart Weitzman and Michael Kors.

Of them all, Aldridge is best known for being a Victoria's Secret angel and spokesmodel.

"I thank God every day for my job. It is just the most amazing job and I'm so grateful and I never take it for granted" Aldridge said on "CBS This Morning" Tuesday. Being part of Victoria's Secret is such a huge honor and I'm just so proud to be a part of it."

Aldridge and her fellow angels took over St. Barts for the "Victoria's Secret Swim Special," which offers viewers a more personal, behind-the-scenes look at the annual swimwear catalog and the models.

"You get to see us being silly and having fun and just kind of follow us throughout our day," Aldridge said.

Aldridge also said the experience was a great "bonding moment" with the newest angels to join the Victoria's Secret angel pack.

"We just want people to see us as humans, see a personality, see what we go through at our jobs. We're regular girls," Aldridge said.

You can catch the special on Wednesday, March 9th at 9/8CT on CBS.

What does it take to put on a drone light show?