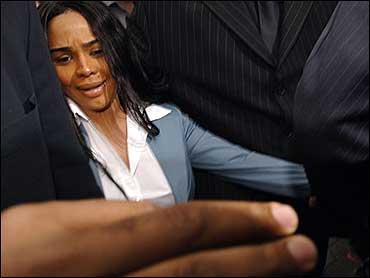 Lil' Kim has filed a $6 million lawsuit against one of the two men who gave wounding testimony at her recent trial on perjury and conspiracy charges.

Lil' Kim was sentenced to one year and one day in prison for lying to a federal grand jury about her involvement in a 2001 gun battle outside a Manhattan radio station.

The 30-year-old rapper, whose real name is Kimberly Jones, has been ordered to report to prison Sept. 19.

In a lawsuit filed Monday in U.S. District Court, she accuses James "Lil' Cease" Lloyd of preparing to release an unauthorized DVD, "The Chronicles of Junior M.A.F.I.A. Part II: Reloaded."

She says the DVD, like a predecessor, was unauthorized and improperly uses her name, image and likeness, amounting to false advertising and false endorsement.

Lil' Kim also alleges that Lloyd has publicly announced that the DVD will include interviews with him and other members of the Junior M.A.F.I.A. explaining their involvement in her trial.

There was no telephone listing in Los Angeles for the company that produced Lloyd's DVD, Ground Zero Entertainment, which also is listed as a defendant in the lawsuit.

Lil' Kim was convicted after she told a grand jury that she didn't see her manager and a friend at the scene of a gunfight outside WQHT-FM, the Manhattan radio station known as Hot 97. A man was injured in the shootout.

In court, Lloyd and Antoine "Banger" Spain - who also worked with Jones in the Junior M.A.F.I.A. - contradicted her testimony.

Lil' Kim was the sidekick and mistress of the late Notorious B.I.G. As a solo artist, she has become known for her revealing outfits and suggestive lyrics. She won a Grammy in 2001 for her part in the hit remake of "Lady Marmalade."