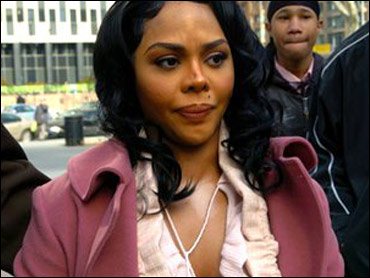 Grammy-winning rap diva Lil' Kim is finally learning her fate, four months after she was convicted of lying to a federal grand jury to protect friends involved in a 2001 gun battle outside a Manhattan radio station.

Lil' Kim, whose real name is Kimberly Jones, could face up to 20 years — five years each on three counts of perjury and one count of conspiracy — at sentencing Wednesday.

While many rappers have served time in prison, she would be the first big-name female rapper to do so.

Lil' Kim, who turns 30 next week, was the sidekick and mistress of the late Notorious B.I.G. As a solo artist, she has become known for her revealing outfits and raunchy lyrics, and won a Grammy in 2001 for her part in the hit remake of "Lady Marmalade."

The rapper told the grand jury she did not notice two of her close friends at the scene of the shootout — her manager, Damion Butler, and Suif Jackson, known as "Gutta." Both have pleaded guilty to gun charges.

The gun battle happened outside WQHT-FM, known as Hot 97, when Lil' Kim's entourage crossed paths with a rival rap group, Capone-N-Noreaga. One man was hurt in the shootout.

Hot 97 is the same station where the posses of 50 Cent and The Game traded bullets in February.