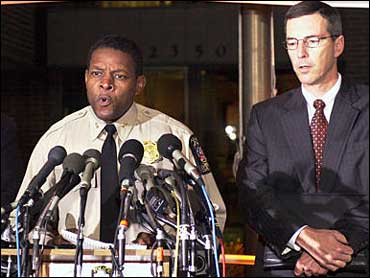 What does the phrase "caught like a duck in a noose" mean to the sniper?

Authorities are not revealing the context in which the sniper - if he is indeed the author of notes left for police - asked them to publicly say: "We have caught the sniper like a duck in a noose."

Police Chief Charles Moose read that sentence aloud late Wednesday night, as part of his latest message to the sniper, adding: "We understand that hearing us say this is important to you."

Until more information is made public, we can't know what the meaning is of the reference to the duck in the noose.

The statement is reminiscent of the children's story "Peter and the Wolf" - a story of pursuit and capture - in which a duck ultimately winds up in the stomach of the wolf, still quacking.

Another folk tale involving prolonged pursuit and eventual capture directly mentions the predicament of a duck in a noose.

On the Tsalagi-L.net Cherokee culture and history web site, a version of "The Rabbit, the Otter, and Duck Hunting" recounts the story of a rabbit who boasts about his ability to catch a duck. The rabbit catches the duck, fastening a noose around the bird's neck. But that deed proves to be the undoing of the rabbit, not the duck, when the duck manages to fly high into the air, with the rabbit still hanging on to the noose, until he loses his grip and falls into a deep hollow tree stump, with no hole in it from which to escape. There he stays, slowly starving to death, until finally he is rescued by calling out to a group of children nearby, a much sorrier rabbit than the spunky braggart at the beginning of the story.