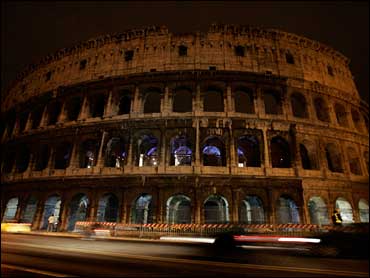 From an Antarctic research base to the Great Pyramids of Egypt and beyond, the world switched off the lights on Saturday for Earth Hour, dimming skyscrapers, city streets and some of the world's most recognizable monuments for 60 minutes to highlight the threat of climate change.

Time zone by time zone, nearly 4,000 cities and towns in 88 countries joined the event sponsored by the World Wildlife Fund to dim nonessential lights from 8:30 p.m. to 9:30 p.m.

An agreement to replace the Kyoto Protocol, which expires in 2012, is supposed to be reached in Copenhagen, Denmark, this December, and environmentalists' sense of urgency has spurred interest in this year's Earth Hour. Last year, only 400 cities participated; Sydney held a solo event in 2007.

In Bonn, WWF activists held a candlelit cocktail party on the eve of a U.N. climate change meeting, the first in a series of talks leading up to Copenhagen. The goal is to get an ambitions deal to curb emissions of heat-trapping gases that scientists say are dangerously warming the planet.

"People want politicians to take action and solve the problem," said Kim Carstensen, director of the global climate initiative for WWF, speaking in a piano bar bathed by candlelight and lounge music.

Organizers initially worried enthusiasm this year would wane with the world focused on the global economic crisis, Earth Hour executive director Andy Ridley told The Associated Press. But he said it apparently had the opposite effect.

"Earth Hour has always been a positive campaign; it's always around street parties, not street protests, it's the idea of hope, not despair. And I think that's something that's been incredibly important this year because there is so much despair around," he said.

The Chatham Islands, a small chain about 500 miles east of New Zealand, switched off its diesel generators to officially begin Earth Hour. Soon after, the lights of Auckland's Sky Tower, the tallest man-made structure in New Zealand, blinked off.

At Scott Base in Antarctica, New Zealand's 26-member winter team resorted to minimum safety lighting and switched off appliances and computers.

In Australia, people attended candlelit speed-dating events and gathered at outdoor concerts as the hour of darkness rolled through. Sydney's glittering harbor was bathed in shadows as lights dimmed on the steel arch of the city's iconic Harbour Bridge and the nearby Opera House.

The Philippines plunged into darkness as well as 647 cities and towns joined in Earth Hour, reports CBS News' Barnaby Lo. It is the largest show of support among over 85 participating countries this year. Last year's Philippine Earth Hour, with only 50 participating cities, amounted to energy savings equivalent to shutting down a coal power plant for one hour.

Tonight, an estimated 10-15 million Filipinos switched off their lights in what organizers call "a vote for the Earth," and a message for world leaders who are meeting in Copenhagen in December to tackle global warming and climate change, Lo reports.

And in Egypt, the Great Pyramids darkened, as did the Sphinx.

To the West, floodlights at the Acropolis in Athens were switched off and an outdoor concert was staged on an adjacent hill, which many Athenians approached in a candlelight procession. The Athens International Airport switched off the lights on one of its two runways.

In that other great ancient city, Rome, the Colosseum and St. Peter's Basilica were plunged into darkness.

In Paris, the Eiffel Tower, Louvre and Notre Dame Cathedral were among 200 monuments and buildings that went dark. The Eiffel Tower, however, only extinguished its lights for five minutes for security reasons because visitors were on the tower, said WWF France spokesman Pierre Chasseray.

"Above all in the current economic crisis, we should send a signal for climate protection," said Klaus Wowereit, the mayor of Berlin, one in a handful of German cities switching off lights at city halls and television towers for Earth Day for the first time.

Meanwhile, the Swiss city of Geneva switched off the lights on theaters, churches and monuments. Among them were the Reformation Wall, where floodlights normally illuminate 10-foot statues of John Calvin and other leaders of Protestantism. The city's motto engraved on either side of the statues is: "After darkness, light."

All of Spain's 52 provincial capitals turned off some lights an hour after sunset, silhouetting unlit landmarks such as the royal palace and parliament in Madrid, the Guggenheim museum in Bilbao, and the Alhambra palace in Granada against darkening dusk skies.

A key 2010 football World Cup qualifier against Serbia posed a dilemma for Romanians. "Shall we watch the match or turn off the lights?," the 7plus daily asked in its main front-page headline.

The U.N. headquarters in New York and other facilities were dimming their lights to signal the need for global support for a new climate treaty.

U.N. Secretary Ban Ki-moon called Earth Hour "a way for the citizens of the world to send a clear message: They want action on climate change."

China participated for the first time, cutting the lights at Beijing's Bird's Nest Stadium and Water Cube, the most prominent 2008 Olympic venues.

In Bangkok, the prime minister switched off the lights on Khao San Road, a haven for budget travelers packed with bars and outdoor cafes.

Earth Hour organizers say there's no uniform way to measure how much energy is saved worldwide.

McDonald's Corp. planned to dim its arches at 500 locations around the U.S. Midwest. The Marriott, Ritz-Carlton and Fairmont hotel chains and Coca-Cola Co. also planned to participate.