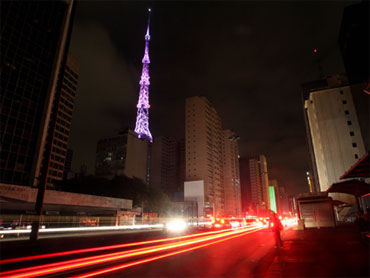 Brazil emerged early Wednesday from a widespread power outage that plunged its major cities into darkness for hours, prompting concern from residents about another black eye for a country hosting the 2016 Olympic Games.

Power went out for more than two hours late Tuesday in Rio de Janeiro, Sao Paulo and several other major cities, affecting millions of people, after transmission problems knocked one of the world's biggest hydroelectric dams offline. Airport operations were hindered and subways ground to a halt.

All of neighboring Paraguay was plunged into the dark, but for less than a half hour.

Lights twinkled back on along Rio's famed Copacabana beach, in South America's largest city of Sao Paulo and in Paraguay's sleepy capital of Asuncion, but questions remained about what happened and what the fallout would be in Brazil, a nation seen as an ascending economic and political power in the region.

"The image of Brazil, of Rio, is bad enough with all the violence," said 35-year-old graphic designer Paulo Viera, as he sat in a restaurant a block from the sandy arc of Copacabana.

Drinking quickly warming beer, he said he worried about how the outage might look for a city that last month was picked to host the 2016 Olympics and will be the showcase city for soccer's World Cup in 2014. "We don't need this to happen. I don't know how it could get worse."

The blackout comes on the heels of a wave of gang fighting in Rio's favelas that led to violence fears for the Olympics.

"It's sad to see such a beautiful city with such a precarious infrastructure," said 22-year-old law student Igor Fernandes. "This shouldn't happen in a city that is going to host the Olympic Games."

The outage occurred when the huge Itaipu dam straddling the two nations' border stopped producing 17,000 megawatts of power, Brazilian Mines and Energy Minister Edison Lobao said. He said outages hit nine of the 27 states in this country of more than 190 million people. No power outages happened in Brasilia, the national capital.

The cause of the failure had not been determined, but Lobao said strong storms uprooted trees near the Itaipu dam just before it went offline and could be to blame.

Lobao said the hydro plant at the dam itself was working, but there were problems with the power lines that carry electricity across Brazil. Brazil uses almost all the energy produced by the dam, and Paraguay consumes the rest.

In Paraguay, the national energy agency blamed the blackout on a short-circuit at an electrical station near Sao Paulo, saying that failure shut down the entire power grid supplied by Itaipu. All of Paraguay went dark for about 20 minutes, the country's leading newspaper, ABC Color, reported.

The agency in charge of the dam, Itaipu Binacional, said the blackout did not start at the hydroelectric complex. It said the most likely cause was a failure at one or more points in the transmission system.

The blackouts came two days after several past Brazilian power outages were caused by hackers. Intelligence reports confirmed that Brazil had already experienced two "cyber attacks" already: one in 2005 and the most recent in 2007. The latter attack affected more than three million people in dozens of cities over a two-day period.

Brazilian officials had played down the report before the latest outages, and Lobao did not mention it.

Cars, taxis and buses sped through dark intersections, honking to make their presence known as they zoomed through. Pedestrians scampered across avenues, and tourists scurried back to a handful of luxury beach hotels, the only buildings with light.