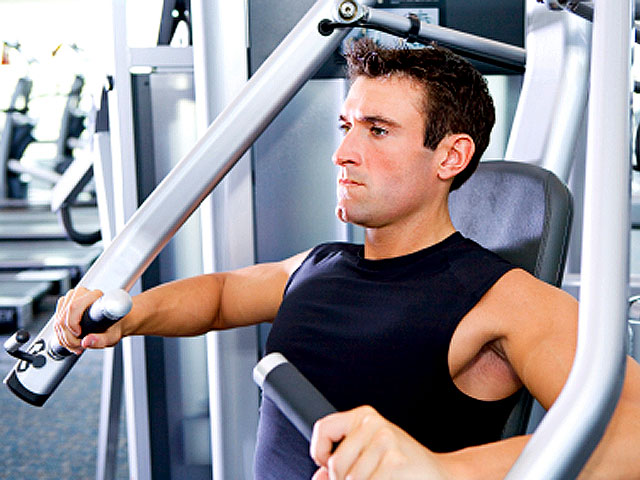 (CBS News) Men who lift weights may have more to gain than bigger biceps: A new study finds pumping iron may protect men against Type 2 diabetes.

The study, published online August 6 in the Archives of Internal Medicine, involved 32,000 men who were followed from 1990 to 2008. Researchers from Harvard University in Boston and the University of Southern Denmark in Odense teamed up to examine the role exercise and weight training had on men's risk for the disease that affects an estimated 346 million people worldwide.

People with Type 2 diabetes can't control their blood sugar because they are resistant to insulin, possibly as a result of obesity because increased fat makes it harder for the body to use insulin properly. Previous research suggests aerobic exercise, such as jogging or running, may reduce diabetes risk.

The new study identified 2,278 people out of the participant pool who developed diabetes over the study period. After adjusting for other factors, such as television viewing habits, family history of diabetes, smoking and diet, the researchers categorized all the men into three groups according to how much weight training they engaged in each week: between 1 and 59 minutes, 60 and 149 minutes and 150 minutes or more of weekly weightlifting.

"Many people have difficulty engaging in or adhering to aerobic exercise," study author Anders Grontved, a nutrition researcher and doctoral student in exercise epidemiology at the University of Southern Denmark, said in a press release. "These new results suggest that weight training, to a large extent, can serve as an alternative to aerobic exercise for Type 2 diabetes prevention."

Subjects who combined weightlifting and aerobic exercise experienced the greatest benefits, with men who did 150 weekly minutes of aerobic exercise and 150 of lifting weights reducing diabetes risk by 59 percent.

The study only looked at men so Grontved said more research is needed to see if the effect is similar for women.

Study co-atuhor Dr. Frank Hu, professor of nutrition and epidemiology at Harvard School of Public Health said the increased muscle mass may improve the body's insulin sensitivity, to cause this effect.

"I think the benefits of weight training are real," Hu told Reuters. "Any type of exercise is beneficial for diabetes prevention, but weight training can be incorporated with aerobic exercise to get the best results."

In a commentary published in the same journal issue, Dr. Mitchell H. Katz, director of the Los Angeles County Department of Health Services said doctors should prescribe exercise to their patients to reduce their risk of dying.

"Some might question whether providing exercise prescriptions is really the job of the practicing physician, a fair question given that we are all trying to do more in our 15-minute visits," Katz wrote. But "I cannot help but note that none of the time I spend trying to decide whether to increase the dose or add a new medication for my patients with Type 2 diabetes is likely to result in a 38 percent reduction in all-cause mortality."