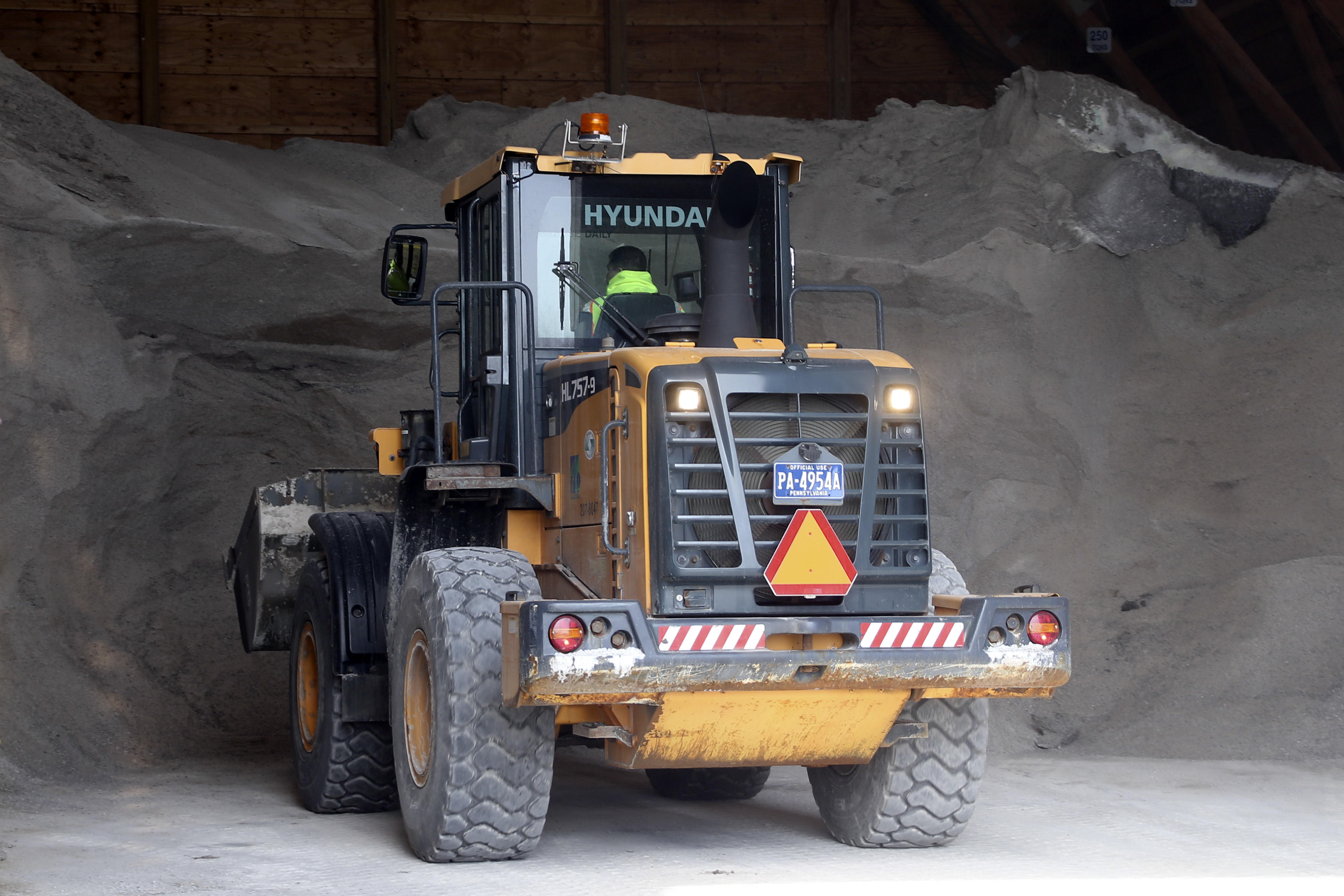 NEW YORK -- A powerful nor’easter is hitting the mid-Atlantic and the Northeast, prompting flight cancellations, school closures and warnings from city and state officials to stay off roads.

Nearly 100,000 customers are without power as the storm brings a mix of snow and sleet with strong winds.

Dominion Power reports more than 50,000 customers in the dark in Virginia on Tuesday morning, mostly in the Richmond area. Maryland officials report about 30,000 outages. Thousands more were reported in Delaware, New Jersey and around Philadelphia.

The National Weather Service issued blizzard warnings for parts of Pennsylvania, New Jersey, New York, Connecticut, Rhode Island, Massachusetts, New Hampshire and Maine. The blizzard warning was lifted for the New York City area at about 8 a.m. EST as forecasters predicted that a mix of sleet and snow would keep accumulations to about 8 inches or less, lower than predicted earlier.

In addition to sleet and snow, the New York City metro area was warned of wind gusts blasting up to 50 mph. Forecasters said coastal areas could see sleet and rain mix in during the day, which would cut down on snow amounts.

The weather service’s office near Philadelphia called the storm “life-threatening” and warned people to “shelter in place.” Coastal flood warnings were in effect from Massachusetts to Delaware.

“A very strong winter storm could be life threatening for those who do not pay attention to safety precautions Tuesday morning,” the office said.

According to the airline-tracking website FlightAware, as of 7 a.m. EST, airlines had cancelled 5,432 Tuesday flights today, bringing the week’s total, including Monday and Wednesday, to 7,746, impacting more than 400,000 travelers.

Amtrak canceled and modified service up and down the Northeast Corridor, with all Northeast Regional service between New York and Boston suspended Tuesday morning.

In New York City, the above-ground portions of the subway system were being shut down Tuesday morning.

Forecasters said coastal areas could see sleet and rain mix in during the day, which would cut down on snow amounts, but CBS News correspondent Anna Werner reports coastal flooding from storm surge is a serious concern along the Jersey Shore.

Federal workers in the Washington area were told they could report to work three hours late or take leave or work from home.

In Massachusetts, where forecasts called for 12 to 18 inches of snow, Gov. Charlie Baker encouraged motorists to stay off the roads and take public transit -- and only if absolutely necessary. The fast snowfall rates will “create hazardous driving conditions across the Commonwealth,” he said.

“We are closely tracking the weather and working with our travel partners and teams in the tournament to ensure the safety of our student-athletes, coaches, administrators, officials and fans,” the NCAA said in a statement.

Villanova, top overall seed in the men’s NCAA Tournament, left Philadelphia on Monday afternoon for Buffalo, New York, to get ahead of the storm.

Bank teller Jana White said her plans for riding out the storm included “lots of hot chocolate and a couple of sappy movies.” The 23-year-old Trenton, New Jersey, resident said she expected to get Tuesday off work.

“It’s a reminder that winter is always ready to take shot at you, so you have to stay prepared,” she said. “We’ve got food and snacks and drinks, so as long as the power stays on we should be in good shape.”

In Maryland, Gov. Larry Hogan declared a state of emergency and urged residents not to be lulled into a false sense of security due to the mild winter.

“This is a serious winter storm,” Hogan said, adding that some parts of the state could see 12 to 18 inches of snow. “It’s obviously going to be the biggest event we’ve had this season and people need to be prepared. They need to be safe.”

The heaviest snowfall was expected Tuesday morning through afternoon, with snowfall rates as high as 2 to 4 inches per hour.

Pennsylvania Gov. Tom Wolf said approximately 700 National Guard members would be deployed, along with more than 2,000 snow plows to try to keep up with the storm, which was expected to bring a foot or more of snow to some parts of the state.

The nor’easter comes a week after the region saw temperatures climb into the 60s. Spring officially starts March 20.