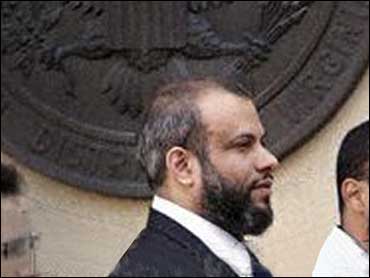 A prominent Islamic scholar who exhorted his followers after the Sept. 11 attacks to join the Taliban and fight U.S. troops was sentenced Wednesday to life in prison.

The cleric addressed the court for ten minutes before his sentencing.

"I will not admit guilt nor seek the court's mercy. I do this simply because I am innocent," al-Timimi said.

"He's allowed to do that in this country," Kromberg said. "He's not allowed to solicit treason. He deserves every day he gets."

U.S. District Judge Leonie Brinkema said the evidence supported the mandatory life sentence. The judge had earlier left open the possibility that she would toss out some of the counts.

About 50 supporters were in court for al-Timimi, who waved to his wife as he was escorted from court. She declined to comment.

Prosecutors portrayed al-Timimi, a native U.S. citizen, as having "rock star" status among his followers, who frequently heard his lectures at a small mosque in Falls Church, Va., a sprawling Washington, D.C. suburb.

In particular, prosecutors said, the defendant wielded enormous influence among a group of young Muslim men in northern Virginia who played paintball games in 2000 and 2001. Authorities said they were a "Virginia jihad network" training for holy war around the globe.

Nine members of the group have been convicted for their roles in the conspiracy, with prison terms ranging from three years to life.

Al-Timimi's lawyers argued that their client merely suggested that Muslims may want to leave the United States after Sept. 11 because of the potential for a backlash against them.

But he was accused of telling a group of young Muslim men just days after the attack that an apocalyptic battle between Muslims and nonbelievers was at hand and that Muslims were obligated to engage in holy war. He told the group that defense of the Taliban was a requirement and that U.S. troops were a legitimate target, according to court testimony.

Several of the men who heard Al-Timimi's speech traveled days later to Pakistan and began training with a militant Islamic group called Lashkar-e-Taiba, officials said. Some testified that their goal was to obtain training that would allow them to fight alongside the Taliban, though none actually made it to Afghanistan.