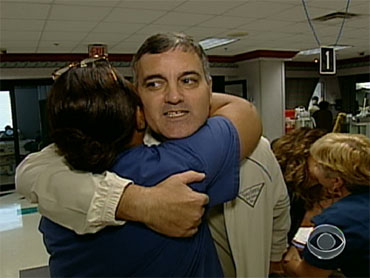 New doses of the H1N1 flu vaccine will arrive across the country this week. But what about those who are already infected?

The virus can make healthy people suddenly very ill. Some doctors say they'd use an experimental drug to help rescue patients on the brink - if only they were allowed, CBS News correspondent Wyatt Andrews reports.

Last month, 51-year-old John Boudrot was so sick from the H1N1 virus he was in intensive care, on a ventilator and suffering organ failure. Not in 30 years of practice had his doctor seen a patient decline so quickly - from perfect health to the doorstep of death.

"He was going on a curve like this," said Dr. Robin Dretler, indicating a steep decline. "Life in immediate danger."

As a last resort, Dretler got the Food and Drug Administration's permission to try a promising, but still experimental, drug called Peramivir.

Peramivir is an antiviral drug like Tamiflu and Relenza. But unlike those drugs, it's being specifically studied as an intravenous treatment for critically ill patients. Human clinical trials in the U.S. and Japan have called Peramivir safe and effective.

Sure enough, four days after John Boudrot got Peramivir he began to improve.

"I am a lucky son of gun to be here, no question about it," Boudrot said.

Dretler said he strongly believes it was Peramivir that made the difference.

The FDA tells CBS News that it has approved 20 similar requests for experimental Peramivir nationwide under laws allowing the "compassionate use" of unapproved drugs.

Patient records are not public, but an unofficial CBS News count found at least eight critically ill patients who recovered or are still recovering on Peramivir. We found two who died.

But among the survivors is 11-year-old year Dalila Gonzalez, who was deathly ill with H1N1. She's an important case because of the alarmingly high number of children, 86, killed so far by the flu.

"She rapidly improved," said her doctor, Robert Armstrong. "The pneumonia got better every day."

But as more patients die in intensive care, doctors want the FDA to speed up the delivery of emergency anti viral drugs. The current process for "compassionate use" takes at least four hours of paperwork time from doctors trying to treat sick patients.

The FDA has said it will consider what's called an EUA, or Emergency Use Authorization, for Peramivir, allowing the government to stockpile the drug and reduce the most paperwork. The FDA says the changes are coming "fairly soon" - but doctors say they're needed now. Sometimes, Armstrong said, "it's only a matter of hours to keep them alive."

As John Boudrot left Dekalb Medical center near Atlanta, it was clear every nurse who cared for him had expected the worst.

"This is the best part about getting better," he said, hugging the nurses.

Experts caution its too early to see Peramivir as a miracle drug, but there's no doubting the drugs connection to some miraculous results.

CDC: Learn More About H1N1
CDC: What To Do If You Get Sick
Flu.gov: Where To Get Your Flu Shots