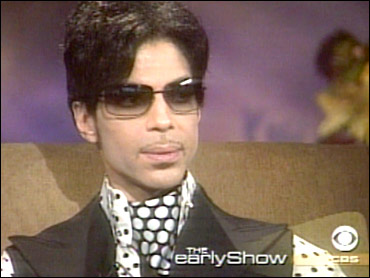 Music must uplift as well as entertain, says Prince, explaining why current events figure so prominently in his songs.

In a wide-ranging interview with The Early Show co-anchor Rene Syler, he spoke about the war in Iraq, politics and, of course, his music, which includes his latest project, "Musicology."

If you're a fan, you know "Musicology" when you hear it - the funk, the mix, the melody is pure Prince.

Some of the songs on "Musicology" make one want to groove like the dancers on the video, but there's another layer here.

After 25 years of making music, this album, in particular one song, "Cinnamon Girl," looks at exploitation. In the lyrics Prince says:

"Cinnamon Girl, mixed heritage. Never knew the meaning of color lines. 9/11 turned that around when she got accused of this crime. Terror alibi. What's the use when the god of confusion keeps on telling the same lie?"

Why is it important for Prince to address some of the issues that we're facing today?

"Well," Prince says, "It seems to be the age old problem of prejudice and misunderstanding between so-called races. You know, I wrote a song once about a large ball, black on one side, white on the other. And the other person, about this big, only seeing that one side. That's the way they think the world is.

"Unfortunately, in war there are children dying on both sides," he continues. "So sooner or later, I think, as a people we're going to have to discuss some of these issues. So I just wanted to put my little two cents in."

Prince started making music in a pre- Sept. 11 world. And he continues on in a post- Sept. 11 world. So the questions are: Is it important to him to use his music to educate? And is that why he draws on current events for some of his music?

Prince replies, "Well, I think music, not only should it be entertaining, but it should try to uplift you in some form or fashion. I mean, I think that's the purpose of music. It's to make light of otherwise dire situations. You take music out of the world it's going to be pretty dark. I think, of course, I would say that, I'm a musician."

How much of his own experience as an African-American is embedded in the lyrics of his music?

"I almost think that we were taught race," Prince says. "It wasn't something that we were just born with. We all look different, and we are all varied in our complexions and sizes. And all that's wonderful. That's good, you know? That reflects the way the universe is built. But when we are-- put in boxes, I've always railed against that. So this isn't a new topic for me."

He's 46 now, but doesn't look anywhere near that. And he exhibits a deepening understanding of what he says, does, and sings about and its influence on society as a whole.

"The simple fact that I'm not alone on the planet." he says. "There are others around me, just by virtue of the children that come to our concerts and things like that. I have a responsibility to them to perform in a manner that I would like my children to be performed in front of. So, that said, I just want to be the best human being I can be so that my faith is going to try to lead me in that direction in all aspects of my life, on stage and off."

The Prince of 2004 is quite a bit different from the Prince 1979, who was singing songs with some pretty explicit lyrics. About this, Prince says, "I always challenge people to play one of my so-called explicit songs up against an explicit song of today.

"If you take some of the music off these songs of today you've got straight pornography. And one thing, I always tried to keep raw sensuality in my music. It was never done in a spirit of misogyny or meanness."

It is evident he is not a misogynist because he tends to employ female musicians in his band. Asked why, he answers with laughter, "That's a good question. They're the better sex? Watch it now. Watch it."

Seriously, he says, "Female musicians, I think, tend to listen better. And they don't let their ego get in the way of music."

Prince wraps of the East Coast part of his sold-out U.S. tour Tuesday night with a stop at Nassau Colisseum. The tour continues through September.

Syler was in college when she became a devoted Prince fan. She says she and her buddies partied with "Dreamed Of," "Raspberry Berets," and "Little Red Corevette," and watched the skies for "Purple Rain." So she was understandably thrilled when Prince invited her to go on stage with the band and she got to dance with him.

Who was Anwar al-Awlaki?