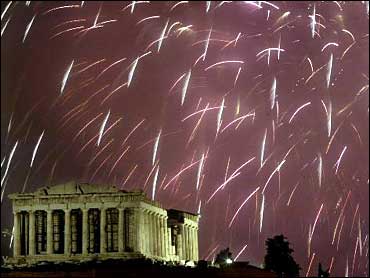 For the first time, the IOC has taken out cancellation insurance on the Olympics: a $170 million policy to cover the risk of the Athens Games being called off because of war, terrorism, earthquakes or flooding.

The Athens Olympics will be the most heavily guarded in history, with a security budget nearing $1 billion — more than three times the amount spent on protecting the 2000 Sydney Games. NATO has agreed to help provide security in Athens. The Athens Games are the first Summer Olympics since the Sept. 11, 2001, attacks.

Terrorism concerns in Europe have increased since the March 11 train bombings in Madrid that killed 191 people.

IOC president Jacques Rogge told The Associated Press on Tuesday that coverage for full and partial cancellation of the Aug. 13-29 games had been signed with a syndicate of London-based insurance companies.

It's the first time the International Olympic Committee has insured any Olympics against cancellation.

The policy does not protect corporate sponsors of the Olympics or television networks, which have billions of dollars riding on the games. The UK insurance firm Hiscox claims to have underwritten NBC's Olympic risk through the 2008 games.

The policy covers a "whole range of issues such as terrorism, earthquake, flooding, landslides, things like that," Rogge said by phone from Lausanne, Switzerland.

He said the move represents "standard prudent judgment" and does not reflect any lack of confidence in the Athens Games, which have been troubled by construction delays and security worries.

"It has absolutely nothing to do with (doubts about) Athens," Rogge said. "We started discussing this already in August 2001, and we are going to work toward the other games in the future."

IOC finance chairman Richard Carrion, who led the negotiations, said the possibility of Olympic venues not being ready on time is not covered by the policy. Neither is the case of teams not showing up for the games. Delays in construction have already led game officials to announced that the swimming pool will not have a roof, contrary to plan.

The Athens policy also covers the bulk of the 28 international sports federations on the Olympic program and the 202 national Olympic committees sending teams to the games. Many of those organizations rely heavily on games-related revenue for their existence.

Rogge said the IOC will also negotiate individual cancellation policies for future Olympics, including the 2006 Winter Games in Turin, Italy, and 2008 Summer Games in Beijing.

The insurance industry was reluctant to offer terrorism coverage in the immediate aftermath of Sept. 11. The IOC had no coverage for the 2002 Winter Games in Salt Lake City. But negotiations for Athens picked up speed two months ago.

Rogge said security has long been the IOC's "No. 1 priority" and that Greece has done "everything humanly possible" to safeguard the games.

"This is an unprecedented effort," he said. "More cannot be done. Nobody can guarantee 100 percent security, but we can guarantee that we've done everything that was available and possible."

Aside from terrorism, insurance experts say the main risk in Athens would be from earthquakes. Athens sits on a fault line. In 1999, a quake in the Athens area killed 143 people, injured about 2,000 and left thousands more homeless.

Rogge said he and Denis Oswald, the IOC's overseer of Athens preparations, are confident Greece will be ready — "but at the last moment."

"They could have had a more easy ride, but what counts is the readiness on the eve of the 13th of August," he said. "I think they will get there in the end."

Besides getting insurance coverage, the IOC is building its financial reserves to deal with any cancellation or disruption of the games.

The reserves have been increased from $85-$90 million in July 2001 to about $160 million, or about $50 million short of what the IOC says it would need to continue operating for four years in the event of an Olympics being called off.