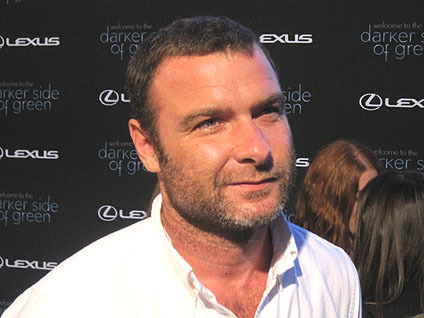 NEW YORK (CBS) Actor Liev Schreiber knows a thing or two about being "green" with a growing family.

The "Salt" actor took part in "The Darker Side of Green" debate Tuesday night at the Bowery Hotel in New York, which tackled issues such as global warming and eco-sensibility.

In Schreiber's two-son household, even kids' clothes get recycled.

The 42-year-old actor and his partner, actress Naomi Watts, are the parents of Alexander "Sasha" Pete, 2, and 19-month-old Samuel Kai. Schreiber says he and Watts follow the usual "Earth smart" parent tactic of handing down his two son's clothing.

Schreiber says he tries to involve his sons in his life as much as possible. His children were with him when he attended the "Salt" premiere in Los Angeles. "The kids are at that age where it's difficult," Schreiber tells Celebrity Circuit. "To make a film, you have to be prepared to give a year-and-a-half to two years of your life."

As for working with "Salt" co-star Angelina Jolie, Schreiber commends her for her "diligence and her commitment to the job" and tells Celebrity Circuit, "She really takes a lot of responsibility."

"Stay-cations" are in vogue in a cash-strapped economy, so when Schreiber has time to hang out with his family in their New York home, they keep it pretty local. "There's a pool at the Y. There's the fish park."

When probed about the exact location of his leisurely New York "fish park," the actor says, "I'm not prepared to give that secret away."